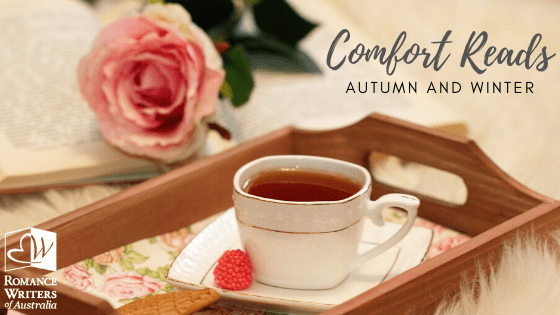 Welcome back to comfort reads! The weather is starting to turn and out come the long sleeves and pants and of course our cosy blankets – perfect for cuddling up in a comfy spot to read our favourite book.

Whilst you’re nestling in today, we’re joind by RWA member EJ Dawson. EJ writes sci-fi action romance and fantasy fiction and is gearing up for her next release in her ‘Queen of Spades’ trilogy. Welcome EJ!

My favourite comfort book would have to be Kerry Greenwood Phryne Fisher mysteries, or a good Discworld novel by Terry Pratchett. I like to curl up on the couch with a cup of tea and my dog beside me, gobbing books on my ereader.

Ayla is a villain. With a gift that allows her to see when anyone will die, she’s remorseless in her profession as the perfect assassin. When she wakes up in a cryo-tank three thousand years in the future, and no idea how she came to be there, all that matters is survival.

Rescued by Leith and the crew of the Nuria, Ayla discovers a far evolved world of space ships and galactic colonization. But everything comes with a price, and though Ayla is no princess locked in an icy tower, she still has to pay for the rescue she didn’t know she needed.

Given over to Leith, a darkly handsome man who reads Ayla far easier than she’d like, they must work together if Ayla is to repay her debt. As the pair come to learn how dangerous one another are, so too grows a lustful bond that comes with rules of its own. Fighting to learn why she was frozen, Ayla’s dragged into Leith’s past with a criminal organization seeking to take over this sector of the galaxy. In order to survive, Leith will need Ayla’s help, but Ayla doesn’t know if she’s willing to pay what it will cost her…

You can find Awakening on Amazon.

Beginning a writing journey with an epic 21 book series, Ejay started her author career in 2014 and has taken on the ups and downs of self-publishing with her fantasy series The Last Prophecy since 2016. At the start of 2019, she put the series on the backburner to write Behind the Veil in 25 days, and signed a publishing contract for the gothic noir novel to independent publisher Literary Wanderlust.

Believing in more than one path to career in publishing, Ejay pursues self-publishing alongside querying traditional publishers with multiple manuscripts.

Where you can find EJ online

You can find her work and daily shenanigans at: