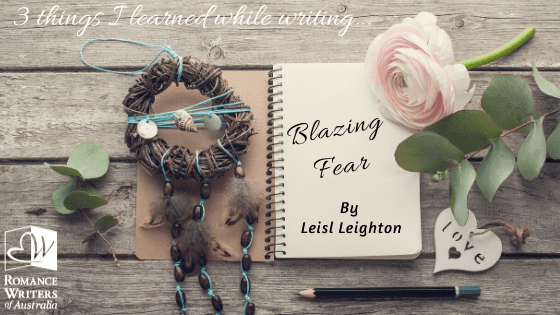 Welcome author Leisl Leighton!  Leisl is a multi-published award-winning author and former president of Romance Writers of Australia. Leisl joins us today to tell us about three things she learned while writing her new release ‘Blazing Fear’.

Blazing Fear is my ninth published book and the 2nd novel in my Coal Cliff Stud series (after Climbing Fear). But even though it is my ninth book, I find that I learn something new with every book I write. These are the three main things I learned while writing Blazing Fear:

It took about 6 months to write and edit up this book to send off to my editor, but it so happened that I was in the middle of writing a fire-fighting scene near the CoalCliff Stud property when I stopped for a lunch break. I turned on the TV and flashing on the news was that there was a fire heading towards Walhalla – which is a town near where my novel is set. When I started writing the scene, there had been no sign of fire anywhere near Walhalla and so it was shocking and quite unnerving to see fiction coming to life before my eyes. Of course, my heart immediately went out to those fighting the fires and whose properties, businesses and homes were being threatened. I watched breathlessly as they managed to stop it from sweeping down the valley and taking out the township – it was a close thing. Needless to say, I didn’t finish writing that scene for a week or so after Walhalla was safe!

2. Despite what Hollywood would have us believe, pyromaniacs are rare

In doing research into fire-setters – the kinds of people who set fires, the psychology and criminology behind fire-setting – to decide who my fire-setter was going to be, I was surprised to discover that there is comparatively very little known about fire-setters, mostly because they can be very difficult to catch because it is a very ‘lone-wolf’ type of crime and there usually are no witnesses. The studies that have been done on those who have been caught describe very particular kinds of personalities, often people with a lack of social skills, who often suffer from some kind of behavioural and/or mental health issue and are ill-educated. There are those who set fires for monetary gain or some criminal reason, but there are also those who set fires because they are obsessed with fire – these are what’s known as pyromaniacs. However, as my title of this section suggests, diagnosis of pyromania is very rare among fire-setters. I was quite surprised to discover this because Hollywood and the media would have us believe otherwise – and it meant I had to change some of my background and ideas on who my fire-setter was.

3. Writing series can be tricky

This one I already knew from writing my Pack Bound series, but with Blazing Fear, it was brought home to me again in a different way. Much of the Pack Bound series was completely from imagination and while I had to track what went into the world-building and characters, because I had made-up most of it, it was somehow easier to do. With the CoalCliff stud series, because it is set much closer to reality than my paranormal series, it meant I had to do more research of the area I was setting it in, going back there and taking photos and interviewing shopkeepers etc to get a more realistic view and had to stick to what I discovered, which at times affected what I wanted to do as the series grew – sometimes restricting it because of what would happen in reality if you lived in that area, but mostly creating more depth to place and character. Making sure everything meshed and blended from the first book had me not only pouring over my notes, but re-reading Climbing Fear where there were similarities or my Blazing Fear hero and heroine appeared. Fun but tricky.

Fire stole his past – now it is threatening to burn everything, and everyone, he loves. All over again…

Flynn Findlay likes everyone to think he’s in control, but the death of his wife during the bushfires six years ago changed everything. Now, even though it feels like a betrayal, Flynn can’t seem to escape his growing feelings for the beautiful new doctor in town. He’s never felt as truly alive as when he is with Prita – even his fear of fire doesn’t seem as bad.

Dr Prita Brennan is ready for a fresh start in Wilson’s Bend with her adoptive son, far from her overprotective family. It would be perfect, except some of the locals don’t like the changes she’s making to the practice. One of them is even making harassing calls. The handsome local horse stud owner, Flynn, is a further complication she doesn’t need right now.

But when harassment escalates to arson, to save the horse stud and their children, Flynn and Prita must work together to figure out who is after her – and why they are trying to burn to the ground everything she touches.

Award winning author, Leisl Leighton, is a tall red head with an overly large imagination. As a child, she identified strongly with Anne of Green Gables, and like Anne, is a voracious reader and born performer. It came as no surprise when she did a double major in English Literature and Drama for her BA and Dip Ed, then went on to a career as a performer, script writer, script doctor, stage manager and musical director for cabaret and theatre restaurants.

After starting a family, Leisl stopped performing and began writing the stories plaguing her dreams. She is addicted to the Syfy channel, her shelves are full of fantasy, paranormal, Sci-fi and romance books and DVDs, she sometimes sings in a choir, has worked as a swim teacher, loves to ski and horse ride, and has been President of Romance Writers of Australia from 2014-2017. She now has a Graduate Diploma in Publishing and Communications (Advanced) and continues to write novels and also helps other writers make their manuscripts shine with her manuscript assessing and mentoring services.

Leisl is the author of the paranormal Pack Bound Series, romantic suspense novels, Dangerous Echoes (Book 1 in the Echo Springs Series), Climbing Fear and Blazing Fear (Books 1& 2 in the CoalCliff Stud Series.) Most recently, she has been a finalist in the 2019 RUBY Awards (for Moon Bound) and a finalist in the 2019 ARRA Awards (for Climbing Fear).

You can catch up with Leisl at: