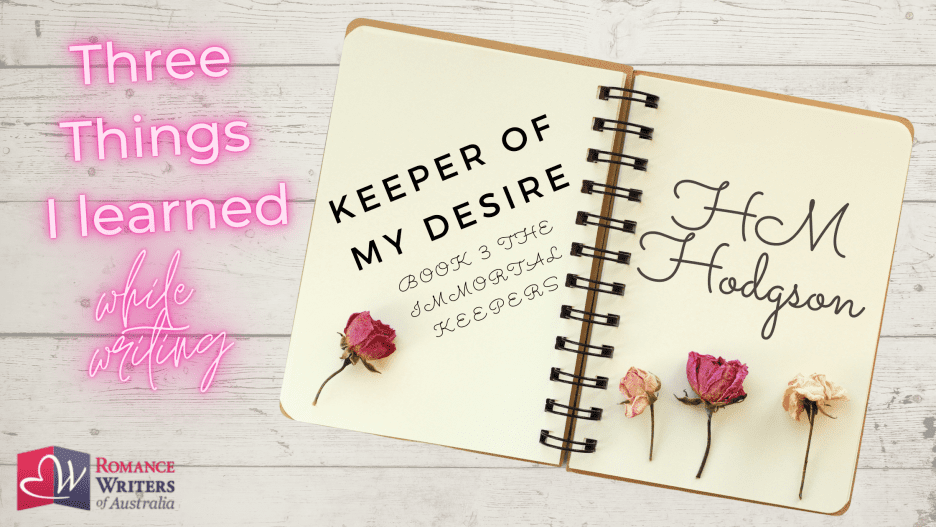 We all know writing can be hard – and especially so for writers who write series. But all that hard work pays off when we see a reader fall into the magic of a good book. RWA member and fantasy romance writer HM Hodgson knows that feeling well, and loves the fantastic places the written word can take us. Join us on the blog today to chat with her about the three things she learned writing the latest novel in ‘The Immortal Keepers’ series: ‘Keeper of my desire’. Welcome HM Hodgson!

KOMD is a fantasy romance set in country Victoria, and the first kiss scene was a finalist in the RWAus First Kiss competition 2021. The story is about a half-blood warrior angel (Amadis) who’s ordered to locate the next Keeper of the World Tree and convince them to join an immortal war. Succeed, and the Angelkin will finally consider her a member of the clan. Fail, and she’ll never gain the Kin’s acceptance. Her target is an ex-soldier running a lodge at the end of a remote high-country lake, who’s vowed never to go to war again. The story has sword fights and seggsy times, mythology and witchcraft, action, adventure, and a HEA.

1. By the end of the book, I was sooo happy to start writing a new series

As much as I love The Immortal Keepers (it’s my debut series with three novels and a short story) and have more story ideas for that world, by the time I pressed the publish button on book 3, I was ready for a break. I never thought I’d look forward to saying goodbye (for now) to my characters—but that’s exactly what happened. What I don’t know yet is how it will feel to re-visit that world when I come back to the next lot of stories…

2. Writers soak up information faster that you can soak up a glass of excellent red wine on a chilly autumn night, but it’s still necessary to research and check the details

The lead male character in the book is ex-armed forces. I’m lucky to have a good friend who’s retired from that world now, and they did a beta read for me and picked up several details that I’d gotten wrong. Some of those details had never even entered my mind as possibly being wrong in the first place.

But it was also interesting to see how many details I got right. This must have come from a couple of things. Talking to friends in the armed forces long before writing the book and absorbing their comments and perceptions about military life. I guess that’s what writers do? We pick up on people and words and feelings even when we’re not writing a specific story about any of those things. The other way must be from reading widely in the military romance genre. Those authors have also done a good job of their research!

One example of a detail I’d gotten wrong is the word bullet. There’s a scene where the lead character has a flashback to a time his team was taking fire from enemy forces, and I’d used the word bullet, as in … taking a round of bullets heading straight for him. But my friend explained they would never the word bullet, but would instead say or think rounds, or bursts.

The other lead character, our warrior angel, comes with two appendages I haven’t written about before. Writing any kind of action sequence (from sex scenes to battle scenes) when your characters have wings is fun. And challenging. But mostly a lot of fun lol. And I had a beautiful comment from one reader about the steamy bathtub scene where those wings played a major part. Can’t wait to write more characters with interesting body parts in the future!

About Keeper Of My Desire: Book 3 The Immortal Keepers

Destiny over desire. Choice versus fate. Duty over death.

Half Angel Amadis is thrilled to be assigned her first angelic task: travel to the Mortalworld and locate the next Keeper of the World Tree. Finally, she can prove herself a capable Angel, even if it means burying her dreams of becoming the next Keeper herself. There’s only one problem – her target isn’t exactly welcoming.

Battle-hardened and jaded after eighteen years in the armed forces, Daniel O’Connor has made a new life for himself. Content running a bed and breakfast lodge at the remote end of Willow Grove Lake, he’s vowed never to fight another war. So when a stunning woman turns up on his doorstep wanting him to fight a battle that defies logic, the answer is no. Hell, no.

But as Amadis and Daniel clash over the World Tree, sparks fly in more ways than one. And when the brutal Order regroup and launch their deadliest assault ever, the World Tree will need every Keeper to protect it and save the Mortalworld.

Millenia ago, the Old Gods created the World Tree to connect and protect the Higherworld, Mortalworld and Underworld. But a secret war rages as the ruthless Order seek to destroy the Tree and rule the Mortalworld. Only the Immortal Keepers stand in their way.

Brisbane author, HM Hodgson has always loved stories. Creating her own is the natural evolution of a passion for reading, a love for what makes people tick, and the fantastic places that can be imagined.

Today, she writes about romance (steamy scenes a must!) and magic. Magic that moves worlds and takes her to another place.

When not writing or reading or reluctantly cleaning up after her children, she loves looking after her veggie patch and little flock of chickens.

Keeper of My Heart

Keeper of My Desire

Where to find HM Hodgson on Social Media