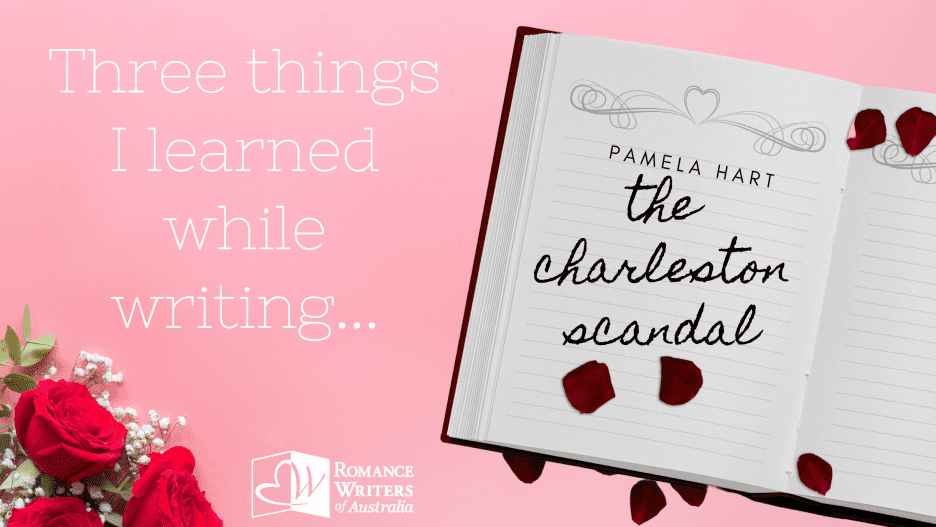 Those of you in the know about Australian historical authors would be familiar with best-selling Australian author Pamela Hart. Her books feature histocial heroines who never compromise their independence and yet still find time for love. Today Pamela joins us on the RWA blog to talk about her new book and the three things she learned while writing The Charleston Scandal. Welcome Pamela!

My new book is The Charleston Scandal, which I think of as ‘Downton Abbey meets 42nd Street’. It’s set in London in 1923 and bridges the worlds of the theatre and the aristocracy. There are lots of real people in it – Fred Astaire and his sister Adele, Noël Coward, Talullah Bankhead and Gertie Lawrence. Plus half of the royal family, including the then Prince of Wales (the one who abdicated to marry Mrs Simpson).

You can imagine the amount of reseach involved! So, what did I learn…

1. You don’t always find what you look for

Well, when I was trying to find a role model for my main male character, Zeke, an actor, I had real trouble. Every leading man in the London theatre turned out to be gay! The only exception was Fred Astaire, but since he was actually in the book, that was no help. In the end, I decided to make use of it, and the underground life of the LGBTQ community became part of the story. (Homosexuality was illegal at this point and people were often gaoled for it.)

I had so much fun writing the gay cabaret club ‘The Gentleman’s Relish’. I think they may be my favourite scenes, apart from the romantic ones.

We all love 1920s frocks, right? I had so much fun researching the fashions! Here’s my favourite image of evening gowns – of course, I’d look shocking in any of these, because you really needed to be flat back and front to wear them! But I do rather fancy the last one with all the ruffles around the hem.

The big innovation was the bias cut skirt, which not only gave a beautiful drape, but allowed the wearer to pull the dress on and off without needing a maid – increasingly important in the years post-WWI, when servants became more and more scarce.

I found out that I just loved writing about the 1920s. I love the modernity of it while still having some of the same social constraints that make writing Regency romances fun; I love the quick changes that are happening in society, the way women are finding a new way of living and new independence – and I adore the music (just as well, since I’m married to a jazz saxophone player).

Honestly, I always have loved it, even before I met Stephen; I’ve been a fan of George Gershwin, Cole Porter and Irving Berlin my whole life. And Noël Coward, of course! Which is why my new novella, Song and Dance, is also set in the world of musical theatre in the 1920s. And I’m in discussion with my publisher about a 1920s mystery series…so cross your fingers for me! With any luck, I could be writing jazz age stories for a long time to come.

About The Charleson Scandal

London, 1920s: Kit Scott, a privileged young Australian aiming to become a star, arrives in the city to find the Jazz Age in full swing. Cast in a West End play opposite another young hopeful, Canadian Zeke Gardiner, she dances blithely into the heady lifestyle of English high society and the London theatre set, from Noel Coward to Fred Astaire and his sister, Adele.

When Kit is photographed dancing the Charleston alongside the Prince of Wales, she finds herself at the centre of a major scandal, sending the Palace into damage control and Kit to her aristocratic English relatives – and into the arms of the hedonistic Lord Henry Carleton. Amid the excesses of the Roaring Twenties, both Zeke and Kit are faced with temptations – and make choices that will alter the course of their lives forever.

The Charleston Scandal is available from all outlets, in both ebook and trade paperback.

Pamela Hart is an award-winning, best-selling author and is published by Hachette Australia, Piatkus UK and Harlequin HQ. Her historical novels are set in the first half of the twentieth century (although she has been known to write an occasional Regency romance). Her last full-length historical novel was The Desert Nurse, which concluded the ANZAC series (which started with The Soldier’s Wife, The War Bride and A Letter from Italy). The War Bride was shortlisted for a Ruby in 2017, as well as for Best Epic Romance in the RONAs. In a new direction for Pamela, The Charleston Scandal is set in London in the 1920s.

As Pamela Freeman, she is well-known as a beloved children’s author and fantasy writer. Her most recent children’s book is a non-fiction picture book, Dry to Dry: The Seasons of Kakadu. Her adult fantasy series, The Castings Trilogy, ended with the award-winning Ember and Ash.

Pamela lives in Sydney with her husband and their son, and teaches at the Australian Writers’ Centre. The Charleston Scandal is her 37th book.

To find out more about the true stories behind The Charleston Scandal, and to sign up for Pamela’s newsletter (and get a free copy of Song and Dance in either ebook or audiobook format), visit: