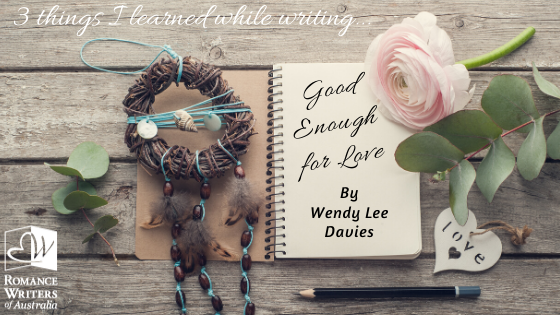 Welcome author Wendy Davies! Wendy is an award winning story teller of contemporary small-town romance. She joins us today to tell us about three things she learned while writing ‘Good Enough for Love’ .

Good Enough for Love was the first romance story I’d ever written. But I started this whole romance-writer lark on the back of a writing career. Technical writing, online content writing, short news articles and long, boring reports were my bread and butter. So, my thinking was that writing a romance novel would be easy. I mean, how hard can it be?

And this story was kind-of easy to write. I mean, I had no idea what I was doing technically, but the joy of writing a creative story, one I could lose myself in, one of my very own creation, with no-one telling me what, who, where and when, was sheer joy.

Now, I long for that ignorance. The sheer, unadulterated liberation. I could write whatever the hell I wanted, without expectations, or doubts, or time pressure. Or that pesky voice in the back of my head constantly telling me, “you know that first story was a fluke, don’t you? You’ll never write like that ever again.”.

Sad thing is, that voice is probably right. But I’m fine with that. Because I’ve grown and changed and learnt so much, I really hope I never do write like that ever again. I hope I write something much, much better.

You know, finishing writing my story was just the first step along a long, sometimes difficult, sometimes amazing, journey.

There’s the editing, something I actually enjoy. (I know, I’m weird like that.) There’s dealing with all those conflicting comments from your beta readers. And the numerous rewrites. Like changing the last third of the story because you made one small alteration right at the beginning! Then came the competition entries. And the pitching – oh, how scary and nerve wracking that was! And dealing with rejections.

And it took all my courage and resilience and dogged determination to get my story to publication standard. But it was worth every single minute.

And winning the Emerald Award was the cherry on the top.

We’ve all heard how the start of your story is so very important. It needs to set up the premise for the book. You need to introduce your main characters. And you must, under threat of non-publication, hook your reader immediately.

Now, the image I had in my head – of a city girl with her bum hanging out of a country hotel window she was trying to break into – may not have had all those elements. But that image was the catalyst for writing the entire story.

And while writing my story, I began to understand that the ending was just as important as the beginning. ‘Leave your readers wanting more’ was the advice I received. Really, honestly, the whole book – from the beginning, to the middle, to where all seems lost, to the satisfying end – everything is important. And it’s worth spending time, energy and sleepless nights getting the story, and your characters, into your readers hearts and minds.

I’m an editor. It’s what I’ve done as a career for longer than I want to admit. So, when I write, I end up spending way too much time making everything perfect.

But you know what? Leaving my editing hat behind on the bedside table is good for me. Essential even. Because then I can just get on and write whatever I want, however I want. Without internal criticism. And with joy.

So, that’s an essential lesson. One I’m still learning.

About Good Enough for Love

Moving to the country challenges everything she knows…
When Amber Hutchinson inherits a country hotel, she plans to do it up, sell it, and move on. After all, living in the country never featured in her plans. That is until she comes across a handsome local sheep farmer.

He always tries to do the right thing…
When Zach Wentworth comes cross a gorgeous, blond-haired woman stuck in his hometown’s hotel window, trying to break in, naturally he tries to find out what’s going on.

Without the hotel, Willow’s Bend is likely to die a slow death. So, Zach does whatever he can to secure his town’s future. But doing the right thing means risking his heart. Again. Amber’s determined to make the hotel into a thriving business once more. On her own. She has little time for her growing attraction to Zach. Something she’s desperately trying to ignore because she knows it won’t last.

While the town gossips eagerly discuss every interaction between them, Amber and Zach must choose between protecting their hearts and taking a chance on love.

Good Enough for Love is available from Kindle Amazon Australia for $2.99 – https://www.amazon.com.au/dp/B07D9C85TG. If you’re more into paperbacks, let Wendy know and she’ll send you one. ($18.00 plus postage).

Wendy lives in Melbourne with her husband and has worked as an editor for a forestry magazine and a technical writer translating IT terminology into everyday English before starting her own business as an online editor.​

Her first romance story, Good Enough For Love (under the title The Drover’s Rest) won the 2017 Romance Writers of Australia’s Emerald Award for best unpublished romance manuscript and was a finalist in the Mid-American Romance Writer’s Fiction from the Heartland competition.

In 2016, it was also shortlisted for the inaugural XO Romance Prize, and, in 2015, it was one of nine manuscripts selected from around Australia to be part of the Queensland Writers Centre/Hachette Australia Manuscript Development Program, and the only romance story of the group.​

Wendy enjoys cycling, especially cycle touring and traversing some of the incredible rail trails in Victoria, and New Zealand. Her other interests include landscape photography, cooking and designing jewellery.

You can find Wendy at:

Website – and would be more than ecstatic if you join her newsletter group!