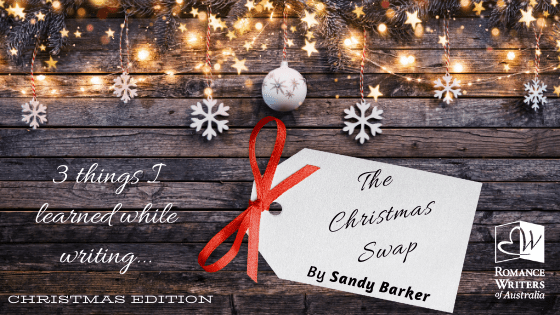 I know, I know, its only November! But with our streaming services uploading all their Christmas movies, why not curl up with a Christmas book instead? Our RWA members love the love that Christmas brings this time of year! So settle down with some Christmas spirits and enjoy our first 3 things – Christmas edition, with Sandy Barker!

I am typically a ‘pantser’ (flying by the seat of my pants) when it comes to writing, with a little bit of ‘planner’ thrown in (I’m a ‘plantser’!). I will start with a premise, a reasonable idea of who my protagonist is, and where I want the story to end up, and then off I go.

For this book, where each chapter is about of one of the three main characters (best friends who live in three different countries), I had to plan.

My character profiles for these characters had to be well established before I even started writing – a glossary of their appearance, their relationships, their objectives, their romantic histories – even the slang they use, as Jules is American, Chloe is Australian, and Lucy is British. These details, which often come to me as I write a single narrative, had to be firmly in place to ensure that each chapter rings true for that character.

Even though the editing process is rigorous once I submit a book to my publisher, including three stages of editing and proofing, I ensure that it’s as polished as I can get it for the initial submission.

While conducting my final edit of ‘The Christmas Swap’ before submitting it, I discovered a major issue with the timeline. The book follows three concurrent narratives in three different countries, only in one section, the character in Colorado experienced 7 hours and the character in Australia experienced 36 hours – for concurrent events, including a phone call between the two. Oops!

I had to rearrange the order of several chapters and re-write key scenes to ensure the timelines were accurate. It was a painful edit, taking me days to untangle the mess I’d made, and at the time I swore off writing another multi-narrative. Though, in retrospect, I’d do it again – I’d just plan out the narratives better!

‘The Christmas Swap’ is set in Colorado, Melbourne (my current hometown) and Oxfordshire, England. I’ve experienced Christmases in all three locations, which is where the inspiration for the book came from, but one of the things I wanted to capture was how rich, varied, and extremely personal Christmas celebrations can be. So, while writing, I not only drew on my own experiences, I researched the nuances of how different people celebrate the holiday, then wove many of those details into the story.

For example, in Colorado, Jules’ family goes into the forest on Christmas Eve and cuts down the saddest looking, scraggly tree they can find, then decorates it with homemade decorations. This seems a little odd to Lucy, the Brit who is spending Christmas there, because her family’s tree is always full and lush, and is crammed with decorations from their collective travels and those she made in primary school. Whereas the ‘showroom ready’ tree in Melbourne is made of blue tinsel and decorated with all-blue ornaments, something vastly different to what Jules has ever experienced.

It’s these details that really bring the three distinct Christmases to life – for each of the characters and (hopefully) for the readers.

For the most part, I thoroughly enjoyed writing ‘The Christmas Swap’, probably because it’s my favourite holiday, and for anyone who picks it up to read this Christmas, I hope you enjoy it.

About The Christmas Swap

Twenty-two years later, they decide to swap Christmases, none of them expecting the hilarity and romantic escapades that will ensue.

Chloe from Melbourne spends her Christmas with Lucy’s mum and dad in a sleepy village in Oxfordshire, England, stunned to the core when she discovers who grew up across the road from Lucy.

Lucy, who has jetted off to snowy Colorado for her dream-come-true white Christmas, is taken into the fold of Jules’s loud and brash family, discovering more about herself in a few short days than she has in years.

And Jules leaves the cold climes of Colorado to spend a balmy ‘Orphan’s Christmas’ with Chloe’s friends in Melbourne, finding that time away from her mundane life is just what she needed.

Join these three lovable women as they each get a Christmas to surpass their wildest dreams.

Sandy is a writer, traveller and hopeful romantic with a lengthy bucket list, and many of her travel adventures have found homes in her novels. She’s also an avid reader, a film buff, a wine lover and a coffee snob. She lives in Melbourne Australia with her partner, Ben, who she met while travelling in Greece. Their real-life love story inspired Sandy’s debut novel One Summer in Santorini, the first in the Holiday Romance series with One More Chapter, an imprint of HarperCollins. The Christmas Swap, Sandy’s fourth novel is a stand-alone and celebrates her favourite time of year.