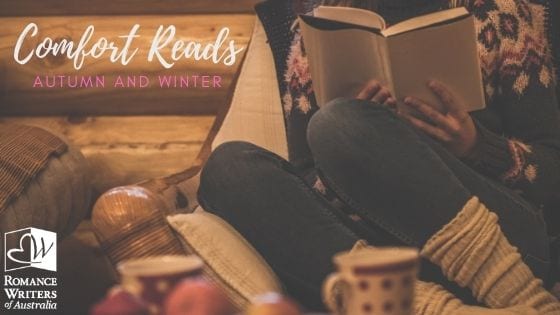 Brrrr! It’s getting colder and colder now we’re heading into late autumn and the air is getting cooler, the days shorter and the nights longer. Lucky then there is always a cosy space inside where we can huddle with a good book, a warm drink, and the occasional cuddle (from human or animal!) Welcome to Novalee Swan who writes paranormal and contemporary romance and whose book series are fun, sweet, sexy, and satisfying, just what the cooler months need!

One of my most trusted comfort books—and one that’s perfect for the months that take us from sticky humidity to torrential rain to leaves that turn to rust to breezes that hint of winter—is The Will by Kristen Ashley.

When globetrotting Josephine Malone’s beloved grandmother dies, she returns to the small town of Magdalene and Lavender House, a century-old clifftop home set in a field of lavender. It’s her last connection to the only person who ever truly loved her.

During the reading of the will, she discovers that her grandmother left Jake Spear—a thrice-divorced single father of three who owns the local strip club and who lives across the road from Lavender House—an extraordinary bequest. I really want to tell you what it is, but I also don’t want to spoil the plot. Let’s just say it’s well worth the read to find out.

Kristen Ashley’s heroines are always intensely wounded (and often too her heroes), and her first-person narration conveys this beautifully (she switches to third person in scenes that are written from Jake’s perspective). I usually prefer to read and write in third person, but Ashley’s books make me want to try writing in first person because they’re such a rollercoaster of emotion that I always end up ugly crying while smiling.

There is also an enchanting small-town quality in The Will, plus melodrama up the wazoo. And a cast of kids who are more than simply plot moppets. There’s Connor, a teen Casanova who keeps a string of girls on the hook, Amber, longing for a positive female influence and the victim of high school bullying, and their younger brother Ethan, a much beloved half-sibling with an absent mother, who craves maternal love.

The Will has all the feels. And I like to feel those feels while curled up on my four-poster bed. On days when it’s overcast, I nestle on top of my fluffy duvet with a soft, faux-fur throw to keep me warm, turn off the overhead lights and flick on my bedside lamp so the room glows, put a couple of drops of pink icing scent in the diffuser, and tell Siri to play me some country music, soft-like. Then I settle in with my iPad for a good, long session of reading.

The Will is perfect for Autumn. I must have read it a dozen times. Recently, Passionflix even made a film adaption—but I still prefer the book. I think you will too.

They call her the masterpiece.

Sabine Rembrandt is used to being an object of desire. As a former supermodel and a purebred Arabian Gray shifter, she’s had the world’s most powerful men at her feet. But none of them ever saw the real woman. The one behind the stunning face and exquisite form. They only ever saw a wild thing they wanted to break. She refused to be dominated by anyone and left that false, glittering world behind. Even though it cost her everything.

Renkin Jones is a black-haired, green-eyed Siberian tiger from backwater Louisiana who speaks Cajun French like it’s the mother tongue. He is also a man who can see below the surface. Intrigued by the mystery of Sabine, a woman with shields he wants to penetrate and walls he wants to tear down, he’s determined to unravel her.

Sabine is equally determined to ignore the tiger prowling around, even if she is tempted by all that raw power and quiet strength, and the words he whispers in the night. But when a predator emerges intent on claiming Sabine, it unleashes the tiger’s fury. That’s when she learns sometimes shields fail and walls crumble, that the one man intent on protecting her is the one man who might break her, and that when a tiger has you in his sights . . . all you can do is surrender.

Ever Unbroken is the fifth book in Novalee Swan’s Shifter Town series. It features her trademark heat and emotional intensity and is perfect for readers who love sexy shifter romance and small-town charm.

Novalee Swan is the Amazon bestselling author of the Shifter Town series. No, she doesn’t shift into a swan—but it’s been on her Christmas list for a while now. Her books are full of heroes that make your heart flutter and heroines you’ll want to fangirl. She has a PhD in Creative Writing, loves sushi, K-drama and caramel cheesecake.