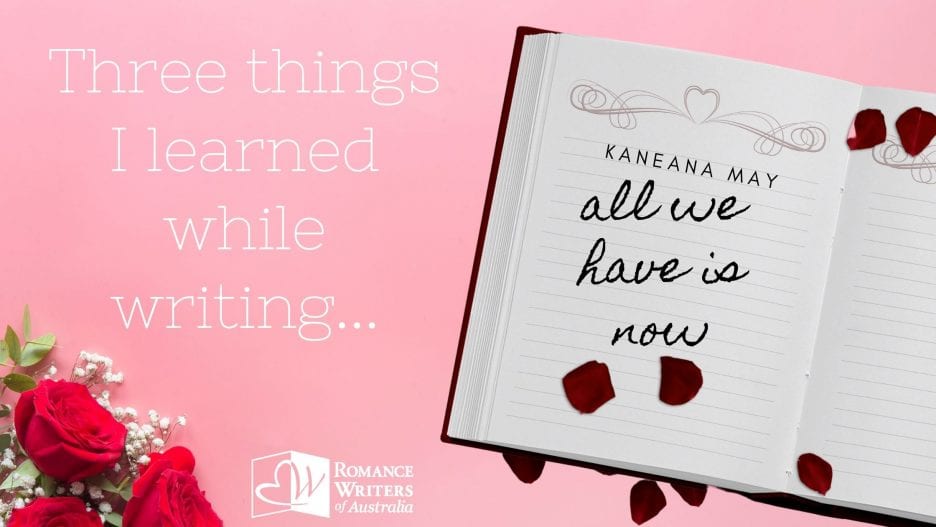 Welcome back to our next RWAs ‘Three Things I Learned’ blog. Author Kaneana May lives on the picturesque North Coast and was a former scriptwriter where she honed her craft before taking up novel writing. Her debut novel ‘The One’ was published in 2019. Kaneana joins us today to share her three things she learned from writing her recent novel ‘All We Have is Now’! Welcome, Kaneana!

1. The delights of Scrivener

I wrote my entire manuscript of The One (and two other manuscripts) in Word. For each of these I wrote interweaving characters and would spend so much time scrolling back and forth within the document, trying to find certain scenes. I would often try to remember a word that I may have used in that scene (and that scene only) to ‘Command Find’ said word and therefore the scene. It was an onerous task and one which I’m sure wasted precious writing hours.

Well, this is no longer a problem for me! I purchased Scrivener and did the online two-hour course with Natasha Lester (offered through the Australian Writer’s Centre) and I was set. I actually bought the Dummies book for Scrivener as a backup, but I’ve only used it a couple of times. Once you get familiar with how the program works, it’s so easy.

I love being able to colour code characters and visually see the story on the screen. There are tools to see it in a binder (kind of like a contents list) or on a cork board, so the program is fantastic for writers who work visually. I also love being able to give each scene a ‘title’ or a ‘heading’, meaning that I can quickly find the scene I’m looking for (no more scrolling). Another feature I love is being able to leave myself notes in ‘new’ scenes. This means I don’t forget ideas and it ensures that I follow up on threads that I’ve woven into an earlier scenes.

I’m sure there are many more amazing features that Scrivener offers, but I already love it. I can’t imagine every writing another book without it now!

2. Books are easier to write when you know the ending

When I wrote The One, I knew quite early on what the very last scene was. I knew how I wanted to end the story. For the whole book, I knew what I was working towards (but I didn’t realise what a luxury this is).

When I set out writing All we have is now, I didn’t give the ending much thought. I figured it would work itself out along the way. However, even when I ‘finished’ the manuscript the ending wasn’t quite right, and it took a long time during the editing process to finesse the tone and feel for all three of my main characters.

I listened to a podcast where Jane Harper explained that she starts with the ending and works backwards. Wow – that’s brilliant and I’m definitely going to ‘try’ to do that next time. Unfortunately, it’s too late for manuscript 3, which I’m in the midst of and have NO IDEA what the end looks like!

3. Cutting words hurt, but it’s often for the better

When I sent All we have is now in to my publisher, the draft came in at 133k. At the time, I felt like all the words were precious and needed to be there. But, during the editing process, 18k words were cut! That’s A LOT of words to end up in the bin, but I think the end result makes for a better book.

During the edits, my editor would leave notes saying, ‘we already know this’ or ‘does this move things along?’ Even when it’s only one sentence at a time, it hurts to press ‘delete’. Sometimes it would be because I really liked that sentence or the phrasing was quite nice, but most of the time my editor was right. The scene moved along quicker without the sentence (or sometimes paragraph!).

Cutting entire scenes can feel like throwing a dagger to your own heart. You remember the hours spent crafting the scene … How long you’d spent figuring out how to get the character to move from one side of the room to another… How many times you’d changed their dialogue … that you spent time looking out the window debating whether your character should have their lips tremble or have a sharp intake of breath.

There is an entire scene that was cut from the end of my book that I still feel torn about cutting. But my editor pointed out how the scene took away from another right before it, and as much as I didn’t want her to be right, she was. (But I must admit, that scene still happens in my mind when I think about the story).

About All We Have is Now

Healing others is their calling, but what happens if they can’t fix themselves?

Health and wellbeing brought Olive, Elsie and Bree together. After five years, their bustling wellness centre is demanding expansion. A beautiful federation house nestled among the picturesque backdrop of their small town is the perfect place to grow their business. But they don’t count on their personal lives getting in the way.

Practical and pragmatic, Olive keeps her past hidden from her friends. But when an old high-school flame shows up, the secrets she’s worked so hard to bury threaten to tear her carefully constructed world apart.

Bree is the fun-loving one, although family tensions lurk behind her free-spirited facade. The reappearance of her troubled sister Winnie brings Bree’s priorities into sharp focus. Will she have to shelve her own happiness to save her sister?

Kind and maternal to all those around her, Elsie’s role as the practice’s counsellor comes naturally. But when tragedy strikes, her world tumbles down like a house of cards.

With everything they’ve built in disarray, their friendship is on the line…