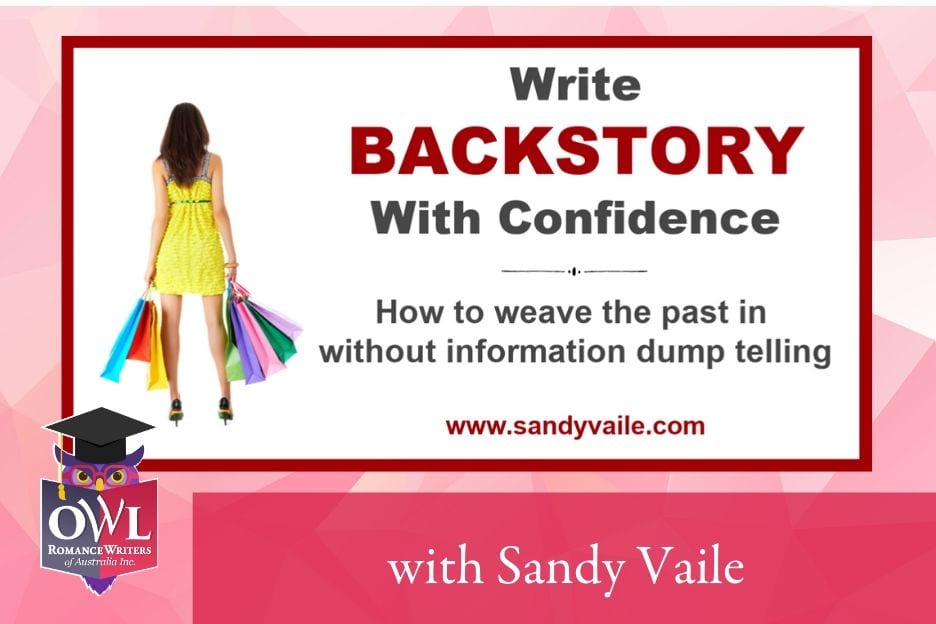 The Write Backstory with Confidence workshop is for fiction writers who want to avoid information dumps and use backstory to provide character motivation that resonates with readers!

Most of us know what backstory is and that our stories need it, are aware of the various delivery methods, and even spend countless hours developing intricate histories for beloved characters, but knowing these things isn’t the same as successfully revealing the appropriate information at the right time.

This article will help you determine the best place to insert backstory by:

Backstory is like the skeletal system in that it’s not always obvious, but the whole structure would collapse if it didn’t exist. This is because it provides the all important believable motivation for our characters’ actions.

Which Backstory is Important?

The most important point when deciding which backstory to include at any point in a story, is whether or not it’s relevant to what’s going on in the main story. Does it explain why a character is behaving a certain way or what is driving them to persist in the face of adversity? Does it give credibility to their decisions and choices? If not, then it probably isn’t needed.

How Much in One Place?

You may have heard my saying that backstory is like a potent spice; it’s like a flavour your can’t quite pick lurking in the layers of a curry. You know it’s there and it enhances the flavour, but it’s intagible and fleeting. Use it sparingly!

My preference is almost always to reveal backstory in small amounts. By doing this, you will reduce the likelihood of telling that distances readers, pulling them out of the main story and unnecessarily slowing the pace.

Of course, there are exceptions to every guideline and flashbacks are one instance where you can get away with a longer passage of backstory because you’re not just telling about the past, you’re transporting readers back to that time and place so they can feel, see, taste and hear it for themselves.

When to Reveal it for the Best Effect

It’s temptating to reveal all of the important backstory as soon as possible but readers want to get straight into the main story. Until they have engaged with the main character(s), they are unlikely to be invested enough in them to care about what happened half a lifetime ago or even last month.

So, resist giving more than tiny tastes of backstory early on. Instead, hint at

In the nick of time…

My recommendation is to reveal most backstory just before the action in the main story requires information from the past to support it and enable readers to understand character motivation and mindset.

Yes, this will require enormous self-restraint on your part. You’d be surprised how little information readers need to understand what you’re trying to say.

The motivation for the main character’s desires, goals and beliefs needs to be clear to the reader, so their actions are believable. This doesn’t mean you have to tell them everything about the childhood trauma that lead to a fear of water, but make it clear that they are afraid.

Then you can give small hints at the details of the traumatic incident over time, e.g.:

These snippets of backstory may be frequent but because they’re blended into the main story, the reader will hardly be aware that they’re gaining such valuable insight.

Even when there may appear to be little backstory, it will be insinuated. Backstory is who your character is. It’s about everything that shaped them as a human being, that lead them to be in the financial, social and moral position that they’re in now, and forms the reasoning for choices they make.

The best way to reveal all of this rich past is to really infuse it into who they are now. Every choice a character makes shows something about them, whether it’s what to wear or say or who to spend time with. Their speech, reactions, choices and internal thoughts all show what sort of person they are now, which insinuates where they came from.

Reveal backstory without interrupting the flow of the main story by determining what information is important at that particular moment in the story and releasing snippets instead of large amounts. For guidance about developing backstory, the various delivery methods and how to use them for best effect, join the February OWL Write Backstory With Confidence: How to weave the past in without information dump telling.

For more info and bookings https://www.trybooking.com/BHEJD

Sandy Vaile is a motorbike-riding daredevil who isn’t content with a story unless there’s a courageous heroine and a dead body. Through Fearless Prose she empowers fiction writers across the globe to enjoy producing commercial-quality fiction and reach their full potential, by providing education and personalised guidance.

Sandy is an experienced course presenter with a decade of experience in the fiction writing industry. She prides herself on providing a nurturing learning environment that enables participants to truly absorb the material and apply it to their own work.