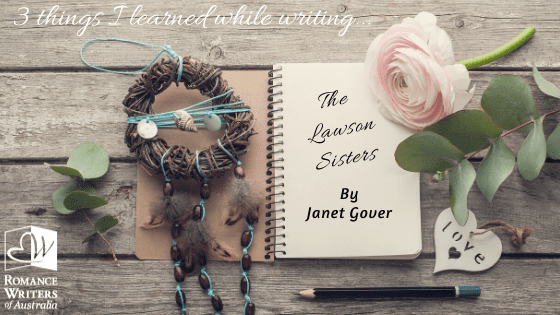 Now 2020 is upon us – holidays are over, kids are back in school and we’re ready for a head down bottoms up back start to the year. But it’s still summer and the living is easy! Welcome to blog contributor Janet Gover! Janet is an award winning novelist who loves writing books about the Australian outback and joins us here today to tell us about three things she learned while writing ‘The Lawson Sisters’.

1. In Japan, you can get married without any ceremony or even a marriage celebrant.

A couple can simply go to their town hall and fill in a family registration form and they are then legally married. Of course, most people opt for a ceremony. There’s not much fun in filling in a form.

I discovered all this while researching for the various weddings that take place in The Lawson Sisters. It was fun research. I had to watch a lot of wedding shows on TV, read lots of glossy wedding magazines and visit wedding venues. I absorbed a lot of information about weddings and of course I only used a fraction of it in the book. But that doesn’t matter. The more research you do, the more likely you are to find that one unusual fact, that one whimsical moment that adds a special flavour to the book. Just remember that at some time you have to stop researching, put away the wedding magazines and write the actual book.

2. How to use scrivener.

In my ‘other’ life I work in IT. I’m pretty organised when it comes to setting up my computers and organising my files etc. I can’t write a book without a good spreadsheet that tracks words counts and POV and… well, you get the idea. I am a bit of a geek girl.

Several friends had recommended Scrivener for writing, but I resisted. I knew I could manage my own files as well as I needed to. I was finally convinced to give it a go. If you decide to try it, I recommend you look at the online tutorials, which are very good. It took time to set it up exactly as I wanted it, but once I had, I decided I liked it. Right from the start The Lawson Sisters had a complex structure and two timelines. Being able to move chapters and scenes so easily in Scrivener really helped. It’s not for everyone, but I’m using it all the time now. (I do also still have my complex spreadsheets, of course.)

I was staying with a friend in Scone where the book is set, researching locations, visiting local properties and talking to breeders and trainers. My friend has a cake business, but I couldn’t bake a cake if my life depended on it (I’ve tried). One day, she took delivery of a collection of fancy nozzles for piped icing and we spend a wonderful afternoon playing with them. She made wonderful flowers, and fancy decorations. I made a mess. But it was a lot of fun, and even messy buttercream icing tastes good.

This had nothing to do with writing the book as such and that’s the point. It’s important to take time off from writing and do something that is both fun and entirely different. It gives your head a break and allows your subconscious to work without you. I always come back to writing refreshed. Treat yourself from time to time – you deserve it.

About The Lawson Sisters

Family, fortune and holding on to what counts…

For many years Elizabeth Lawson has battled single-handedly to run the family’s historic horse stud in memory of her beloved father. But a devastating loss puts her dreams at risk. With no options left, Liz is forced to turn to her estranged sister Kayla for help.

Kayla has built a new life in the city as a wedding planner, far removed from the stableyard sweat and dust of her rural upbringing. She never thought she’d go back. But when Liz calls out of the blue, Kayla forms a plan that could save their childhood home.

Kayla’s return forces Liz to confront her past … and her future, in the shape of Mitch, her first and only love, who still watches over her from the other side of the creek.

But Liz still hides a terrible secret. When Kayla learns the truth, will the Lawson sisters find common ground or will their conflict splinter the family once again?

You can find the Lawson Sisters on Amazon.

I grew up surrounded by books. Both my parents loved to read and they shared that love with me. In the tiny Australian bush town where we lived, there wasn’t a lot to do except read and ride my ponies.

As it’s pretty hard to make a living out of riding ponies, I guess I was always going to be a writer.

After some fun-filled years at Queensland University (during which I passed the occasional exam), I became a television journalist, first in Australia, then in Asia and Europe. I got to see and do a lot of unusual things. I met some interesting people, including one Pope, at least three Prime Ministers, a few movie stars and a dolphin.

I also discovered that most interesting people are often the ‘ordinary’ people – who sometimes have quite extraordinary stories to tell.

My first published fiction, a short story called The Last Dragon, appeared in 2002. I love writing short stories and you can check some of them out for free on the site.

My first novel, written when I was about 11 years old, involved a young girl (me) being rescued from kidnappers by two handsome men – one of whom was former James Bond Roger Moore.

My first published novel, The Farmer Needs A Wife was released in 2009. It might not surprise you to learn that it was set in Australia and featured men on horses.

Australia, horses and men still feature in my writing – although I have written one book without horses in it. There were penguins instead.

I enjoying running workshops and teaching. Twice a year I lead writing retreats with fellow writer Alison May. You can check out those retreats on my page for writers.

Alison and I also write together under the name Juliet Bell. Our first joint novel, The Heights, is a modern adaptation of the classic story by Emily Brontë. It’s set in Yorkshire, against the backdrop of the miners’ strike and the decline of a once proud pit community. There will be more Juliet Bell books to come.

I travel a lot – and many years ago in Hong Kong, I met an Englishman with green eyes – which explains why I now live in London. My travels inspire me – but it seems that when I write, I often come back to the place I grew up.

Some things you never leave behind.