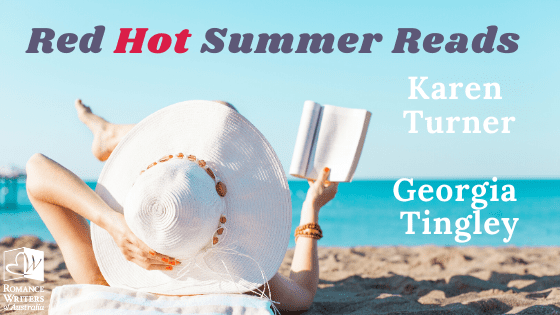 Another two weeks and summer will definitely be over. Those who love the sun will mourn its loss, but just in time we have two more hot summer reads to keep us sizzling until the very end of the season! Today we feature Karen Turner and Georgia Tingley, their books, and their favourite place for summer reading.

A German fighter plan is shot down over rural Yorkshire; the pilot has vanished.

In an old farmhouse on the outskirts of Leeds, war-widow Jessica is raising her children and running a small dairy. When she encounters the Luftwaffe pilot hiding in her barn, she realises the young captain is dangerously ill. Despite the consequences, Jessica commits to nursing him back to health.

At first, prejudice and ignorance separate Jessica and Anton, but slowly these barriers are dismantled. From an unlikely friendship emerges a story of forbidden love that defies war and bigotry.

A British government investigator is sent to hunt and capture the fugitive German. Harbouring the enemy is among the greatest of crimes, and when suspicion falls on Jessica, a series of terrifying events are triggered, threatening her freedom and the security of her children.

In this world at war, there are no winners. It is a time of fear and uncertainty, where danger lurks behind every door and sometimes the greatest threats come from those you trust.

Stormbird is the third and final book in the Broughton Hall trilogy.

Stormbird was 2nd round shortlisted in the 2018 Emerald Pro award (equal 3rd). You can find Stormbird and the rest of the Broughton Hall Trilogy on Amazon.

I live near the Murray River, which forms the border between NSW and Victoria. There is a grassy spot on the bank of the river which provides a sunny, comfortable place to lay on a blanket and lose myself in a good read. Across the river are grazing cattle, whose gentle lowing blends with birdsong and the burbling of the river; perfect for a bit of alone-time.

I was born in Australia to an English mother and Italian father. After a twenty-year writing career in the Financial Services Industry, I found my true passion: fiction writing.

My first published book, All that & everything, is a compilation of award-winning short stories. My first novel, Torn was quickly followed by its sequel, Inviolate.

Stormbird is the final instalment in the trilogy.

I live in Victoria’s Riverina region with my husband Stuart, and rescue-cats Panda and Katie. When not writing, I volunteer at an overseas animal shelter, enjoy running and catching up with friends.

Where to find Karen:

She’s been someone else’s … now Adam was back to show Faith she’d really been his all along. Must read second chance love.

When my best friend suggested I take a young, hot, sexy, stud-muffin as my date to meet my ex-husbands much younger fiancée, I allowed my arm to be ‘twisted.’ Nudging Forty, I felt battered, and my ego bruised – it was just what I needed.

“Adam,” Rachel voiced the one name hovering between us since the words, sexy, hot, and young, had been mentioned in the same sentence.

Adam was my friend’s younger half-brother. We’d always been close, and I’d considered him to be a young brother to myself as well. Then something unthinkable happened between us on his eighteenth birthday that drove him away for ten years.

Now he was back, looking so good it should be illegal, and wanting to resume where we had left off. The soul-incinerating chemistry still bound us, but was my self-doubt too big a hurdle to leap?

For the longest time, Faith has been perched on the peripheral edges of my heart. Since that fated night all those years ago, I had known she was it for me. I was a boy then, too young and dumb to understand that we were soulmates. But my heart knew it, and never let me forget. I’d tried to move on, I really had. She was married, after all.

So, when my sister asked if I could do Faith a favour and play along as her date to meet her idiot ex-husband and his soon-to-be trophy wife, I knew fate was opening a door for me.

This time, I was no amateur. This time, all I had to do was convince her we were meant to be. Sounds easy, right? Well, you haven’t met Faith…

Having Faith is the first in Georgia’s ‘Mature Love’ series and available now on Amazon.

Georgia Tingley’s favourite place to read in the summertime.

When reading is a joy and an addiction at the same time as it is for me, I find places to read at every opportunity – the lounge room, at the kitchen bench, in the back garden. I’ve even been known to read in the laundry while waiting for a load to finish before hanging outside.

Summertime offers the joy of reading in my back yard. I have a lovely space which has an outdoor seating area with two recliner lawn chairs. Large Frangipani trees shade me with their fragrant flowers in summer, while the soothing sounds of a trickling water fountain act as a wonderful background to my reading. Often, I’ll take my laptop outside and do some editing or writing, although I tend to like to sit at my desktop for the more serious work. I also have a below ground swimming pool with a waterfall, and on hot days or evenings it’s magical to lie out there and read, having the occasional dip to cool off. I don’t read floating in the pool, it’s too wet and I don’t want to ruin a good book.

Also, in the summer months my husband and I try to get away at least once a month. We have a caravan and we like to explore our country. We’ll hitch up and go away for the weekend to some quite area and head to the beach or bush. I don’t like to read at the beach, especially after a brutal sunburn from reading and neglecting to cover up. But we usually come back to the caravan at lunchtime, and after eating we’ll kick back and read under the shade. More often than not, we fall asleep after a chapter or two, but what a great way to nod off!

Currently I’ve been sitting out the back, proofreading my second edit on my upcoming steamy contemporary novel in my ‘Mature Love’ series called All The Dumb Things. Hopefully, I’ll be releasing in March, so look out for it. Subscribe to my newsletter for updates: http://georgiatingley.com/contact-us

Georgia Tingley is a new player on the author scene. Having lived in various countries while growing up – India, England, Canada, New Zealand and Australia she calls Western Australia home, living near some of the best beaches in Australia.

In her downtime she loves to read, watch TV shows and movies, do crafts and get into the garden. Swimming and snorkelling are favourite pastimes and she tries to do laps at every opportunity.