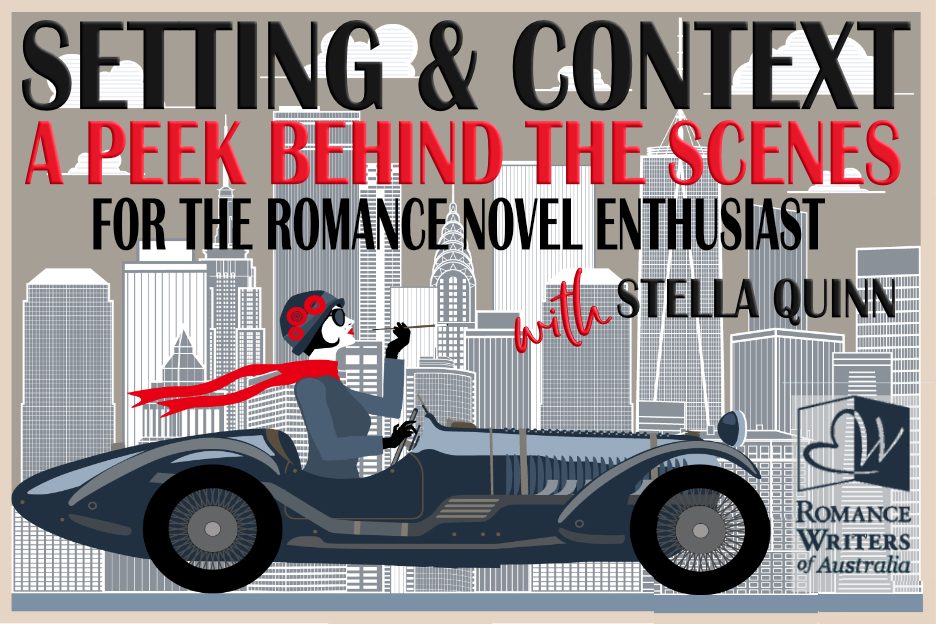 New York City! The beautifully illustrated Literary Places describes New York as “a seething megapolis of taxi cabs, dive bars, movie stars, uptowners, out-of-towners, priests, pimps, players and phonies”, but suggests despite the teeming busyness … the city can be a lonely place. A place to hide, as well as to show off. I wonder how out authors this week chose to use it? (Baxter, 2019)

Here’s the super-brief recap of the premise of this series in case you haven’t read the first article:

The Setting & Context articles uses two novels each month to examine how writers engage their readers through setting and context.

There are three crucial elements to a story: character, conflict and context.

Character provides the heart, conflict provides the story, and context is the framework within which all the elements of fiction bounce and jostle together to become a unique and engaging read.

Context is a boundary (like a squash court) against which your characters and conflicts can be pushed, or a safe-haven in which they can flourish.

That boundary can be physical (think a spaceship), social (think women before they got the vote), or by choice/trait (think marriage, or being addicted to painkillers, or being heterosexual)

Writers trap their characters inside contextual walls with their conflict – the characters cannot walk away, they must work it through, and this is why the strength and believability of the context and setting in fiction is crucial.

You ready to start exploring some more context and setting?

Let’s open those book covers and explore the craft authors use to make their context and settings strong and believable. This month I am taking you on a day trip to New York City, so let’s go meet our travel companions.

Travel companion number one is J.D. Robb, the pen name of writing superstar Nora Roberts, and we are reading the first of her In Death series featuring Eve and (*presses hand to heart) Roarke. Confession: I have read this book about four times. You’d think, this time around, I could concentrate on the scenery and be done with it. Nuh-uh-no-way-no-how. The funeral scene? When he looks five pews back? Yeah, I may have been distracted from my perusal of context from that moment on. Right, where was I? A quick google informs me that Nora Roberts, over the last 30 years, has sold 27 books every minute. Every minute. I can’t wait to learn from this master of the craft of writing how she handles context and setting.

Craft tip: read how the experts do it. Notice what they do. (Read blogs like this one, lol, that pick books apart for you.)

Travel Companion number two is Australian author Joanne Dannon. I am reading Joanne’s New York set novella A Magical Chanukah in New York. I don’t know Joanne, but I’ve read her bio on her website, and I adore reading stories authors share of how their writing careers moved from newbie to award-winning, successful author. Joanne is living the dream (definitely my dream), and recently won the AusRomToday 2017 Reader’s Choice Award for Author of the Year. What an honour.

Let us peek into some text now and consider some strategies our two travel companions employed to create their context and setting.

Naked in Death by J.D. Robb

This novel is set in the year 2058. New York is both recognizable (busy, lively, smart-mouthed) and vastly different. How has J.D. Robb shown us these changes? How does the future New York impose pressure on its characters? Inform the plot?

This future world has rules we won’t know intermixed with rules we will, so Robb has to clue us in so we can understand when these rules are being used to apply pressure to the characters and/or plot. Here are just some of them:

Here are some instances from the novel where Robb is immersing us in her imaginary New York City of the future, and using her “rules” to pressure plot and character:

Craft tip: context can be a rich source of conflict — include restrictive rules in your world to increase pressure on characters and make them struggle.

A Magical Chanukah in New York by Joanne Dannon

This story is set in contemporary New York City. It’s a place that readers can readily imagine, so setting can be dealt with in concise ways. Characters Gabe and Lisa discuss the Tenement Museum and visit the Empire State Building. They walk along Broadway, they eat hot dogs from a street-side vendor and Gabe describes the hotdogs as “kosher”. (Dannon, 2017). The specifics root the story in New York, so the setting is distinct rather than being any large city.

The story is also set to coincide with the Jewish festival Chanukah, which occurs in December, so we know it’s deep winter, and holiday lights are strung up all over the city.

So that is the setting (super briefly) … what about context? How do the rules of the fictional world Dannon has created put pressure on her characters and constrain the plot?

This story is a novella, so written on a smaller scale than a novel, hence making it easier to see the patterns. A short story would make an even more acute study – the shorter the word count, the greater the need for the writer to be deft and succinct.

Here are some instances from Dannon’s story:

Context & Character: Lisa is a tourist, and Gabe encourages her to take time out from her volunteering role to experience the city. “There’s so much to see here … you name it, we’ve got it.” What Gabe doesn’t know is that Lisa has a secret. She’s not just a tourist, she’s run away from her home town of Melbourne to escape scrutiny after a messy breakup and has been content hiding away in her volunteer role. Dannon has used the sight-seeing rich plethora that is New York as a pressure point to expose her main character’s vulnerability.

Context & Plot: Lisa and Gabe meet mid-winter in a building in a highly-priced zone in New York which is being used as a meals and coffee venue for homeless people. That’s two contextual pressure points already: high rent and freezing temperatures. So Dannon uses these pressure points in a plot conflict. The centre is going to be closed down on New Year’s Day … Lisa must try to convince Gabe, a well-connected businessman, to help find an alternative venue; and the freezing weather makes it urgent. “Where would her customers go? … The winter cold outside was freezing. She expended a long breath of frustration.” (Did you notice the character development side-benefit to this plot device? Lisa’s empathy for her clients shows her to be a heroine the reader can empathize with, as does Gabe’s willingness to try help.)

Craft tip: examine your fictional world. What are its rules? Use them to pressure your characters.

Toot toot, all aboard, mind the gap!

I hope you’ve enjoyed our journey into context and setting via New York: present and future.

Next month I’ll be heading to the wild and untamed country beneath Australia’s southern skies. We’ll be visiting the Murray River, that great and historically significant waterway that runs from the Australian Alps to the Southern Ocean, through the words of writer Darry Fraser and her novel Daughter of the Murray. We’ll also be taking a dusty peek into Wonnangatta Valley courtesy of The Horseman, by Charlotte Nash.