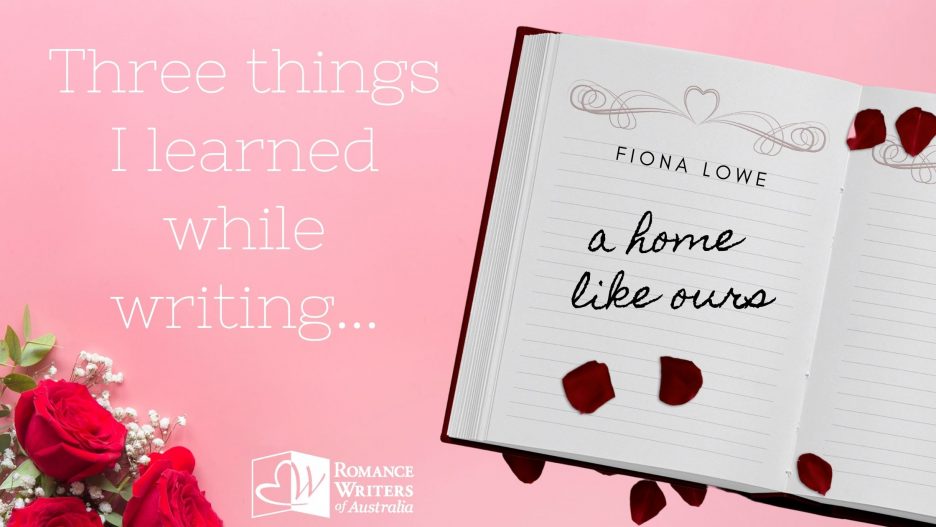 Welcome to the RWAs ‘Three Things I Learned’ blog. Author Fiona Lowe is an Australian award winning and best selling author of contemporary fiction. Fiona’s many accolades include a RITA (Romance Writers of America) and a Ruby (our homegrown romantic book of the year award) Fiona’s stories touch on family and relationships and she’s here today to tells us three things she learned from writing her latest novel ‘A Home Like Ours’. Welcome Fiona!

I love research. It’s always been a joy, but I had the most research challenges I’ve ever experienced when I set out to write A Home Like Ours. I wanted to talk to skilled migrants and refugees so I went through the official channels and contacted community groups and refugee resettlement services. I sent emails, made phone calls, but I kept hitting blank walls. No one wanted to talk to me. I got it. These communities didn’t know me so they didn’t trust me. I needed an introduction. I was starting to get desperate so I asked everyone I met, ‘do you know… do you know anyone who knows anyone who…’

As so often happens the network came through. Again I was fortunate/privileged to have a network of people to draw on and who recommended me to four fabulous women from three different African countries and Afghanistan. They generously sat down with me and answered the question, ‘if I gave you a garden what would you plant?’ Of course it was always the food of home. I listened eagerly, took notes, got hungry and thanked them. Eighteen months later I was thrilled they all came to the book launch, which was held in a community garden. Researching community gardens also proved tricky, but that’s another story…. Lesson? Persistence.

2. A new editor, a wall of pain and an old dog can be taught new tricks.

After the same editor for four books, I was assigned a new editor for A Home Like Ours. My previous editor had never commented on chapter length. It was quickly apparent my new editor was a fan of the short chapter and I’ve always written two to three scene chapters. The manuscript was littered in green writing. New chapter here? I think this would work better if you moved A to C and B to A and C to M. My brain exploded. It was a nightmare and the second most challenging structural edit I’d ever done. I feared losing control of the book as I moved massive sections around. I had spread sheets. I had blocks of coloured text. When the final proofs arrived and I read it with my heart in my mouth, I conceded she was right. The book didn’t have any flat bits. Guess who is now writing the short sharp chapter style?

3. A cover that keeps on giving.

The cover for A Home Like Ours arrived and at first glance I thought it was a pretty floral cover. After all, the book is set in a garden. But then I looked more closely and hidden amongst the pretty were some truly horrid creatures perfectly representing the evil forces at play in the book. Creatures/people who hide in plain sight. I fell in love hard. It’s my most favourite cover to date.

A picturesque small town, a cosy community garden, a facade of tolerance and acceptance – but when three women with wildly different loyalties come together, what secrets and lies will be revealed? A timely novel exploring prejudice and privilege, from bestselling Australian author Fiona Lowe.

Tara Hooper is at breaking point. With two young children, a business in a town struggling under an unexpected crime wave, and her husband more interested in his cricket team than their marriage, life is a juggling act. Then, when new neighbours arrive and they are exactly the sort of people the town doesn’t want or need, things get worse.

Life has taught Helen Demetriou two things: being homeless is terrifying and survival means keeping your cards close to your chest. Having clawed back some stability through her involvement in the community garden, she dares to relax. But as she uncovers some shady goings-on in the council, that stability turns to quicksand.

For teenage mother Jade Innes, life can be lonely among the judgement of the town and the frequent absences of her boyfriend. A chance encounter draws her into the endangered community garden where she makes friends for the first time. Glimpsing a different way of life is enticing but its demands are terrifying. Does she even deserve to try?

Can such disparate women unite to save the garden and ultimately stop the town from tearing itself apart?

Fiona Lowe has been a midwife, a sexual health counsellor and a family support worker; an ideal career for an author who writes novels about family and relationships. An award-winning author, Fiona’s books are set in small country towns and feature real people facing tough choices and explore how family ties impact on their decisions.

When she’s not writing, she’s a distracted wife, mother of two ‘ginger’ sons, a volunteer in her community, guardian of 80 rose bushes, slave to a cat and is often found collapsed on the couch with wine.

Where to find Fiona online: