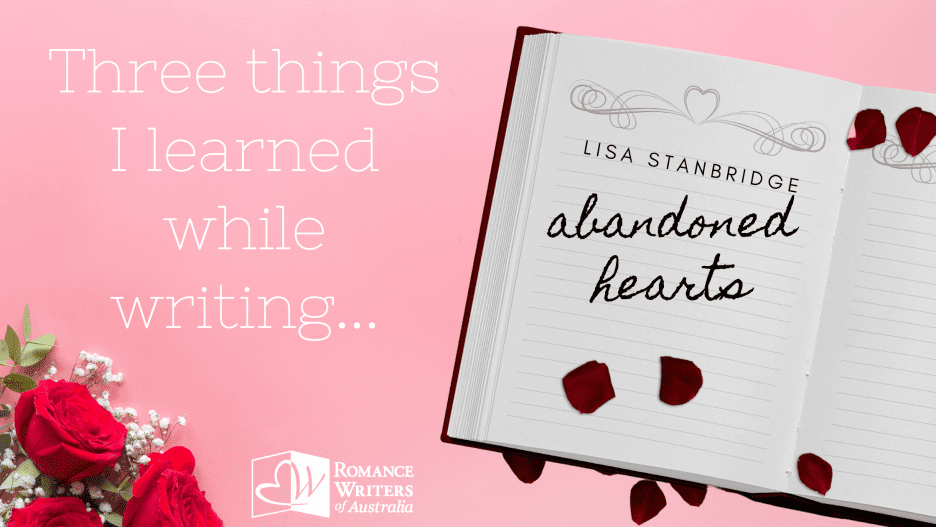 Welcome to another edition of ‘3 things I learned while writing…’ where our members tell us about their writing process, their book and themselves! Writing has been Lisa Stanbridge’s passion for as long as she’s been able to string sentences together. Lisa has just had her debut novel released, ‘Abandoned Hearts’. Please welcome Lisa!

Abandoned Hearts is a sensitive story with two exceptionally flawed characters. The heroine has escaped a physically abusive marriage and the hero has escaped a manipulative marriage. I had to tread carefully with them.

When I first wrote it, both characters were broken, fragile, and more often than not, rude. The rudeness was for all the right reasons, but I struggled to find a balance where they could be rude but also likable. How could I do this and still have the readers sympathise with them? This became my learning curve.

At first, I took the characters way too far. The hero was not only unlikable but downright misogynistic. The heroine was verging on being a misandrist. It was all so wrong, they weren’t supposed to be like that!

In the end, I stripped both characters bare and started again. I had the bones, I just needed to tone it down. They had every right to be bitter, broken, and occasionally rude, but not to such extremes. So, I found one quality each that made them likeable and developed them so that they shone despite their flaws and the characters grew.

Writing flawed characters can be challenging but also rewarding so I encourage everyone to embrace it.

2. Some scenes definitely don’t have to be there.

I had many scenes of my heroine being abused by her ex-husband in earlier versions of my story. To allow her to evolve, it needed to be there. I needed her to be fragile yet strong and I couldn’t do it justice without having ‘experienced’ it myself, so to speak.

My mistake was keeping it there. Not only did it make for a very dark and unsettling story, but it also slowed it down. I received a lot of feedback saying it was misplaced and unnecessary but I couldn’t see this at first so stubborn ol’ me ignored it. Then one day, after sitting on it for a few years, I decided to tackle it. I went back to all that feedback and got ruthless.

I ripped out every single abuse scene, revamped my characters, and put the story together again like a jigsaw. Suddenly, voila! it was a hundred times better. To everyone who was honest with me…thank you. Because now, it’s a story I’m proud of that’s finally been published.

My word of advice: Don’t be afraid to cut unnecessary scenes. It’s daunting and sometimes difficult but trust me, your story will be better for it.

3. Not everyone is going to love your story as much as you do.

And that’s ok, but sometimes it can sting. No amount of blood, sweat, or tears will make every single person love your story. Some people just won’t, plain and simple.

When I entered it into contests, I’d get hung up on judges’ comments that pointed out flaws about my story or my characters. I know they were well meaning, but as all writers know, our story is a huge part of us. Our characters become very real. So, when someone points out things they don’t like, we might get defensive.

I’ve since learnt that I need to stop being so sensitive and it’s okay if someone doesn’t like my story.

The key is this: Write what you want to write. Don’t let people’s comments and opinions get you down. Learn from good feedback and brush off the feedback that isn’t beneficial. Just give your story the love it deserves.

A traumatized nurse and an angry, desperate single dad must learn to trust again and open their hearts to love.

LEANING TOWARD THE LIGHT

Finally free from her abusive ex, Claire Stone accepts a job as a live-in nurse in the small beach-side town of Busselton, Western Australia. A new life is exactly what she needs. Move away, move on, forget. If only things were that simple. Even the intriguing but abrasive son of her new patient can’t shield her from relentless memories.

​Michael Karalis is watching his mother die while battling his ex-wife for custody of his five year old son. He’s bitter, broken, and distrustful, but Claire becomes a light in his world, despite his reservations. Two broken souls need to learn to trust again and open their hearts or they’ll never find the love they both need.

​Abandoned Hearts is available on Amazon and Barnes and Noble

My writing life started off with princesses in castles being saved by Prince Charming. As I grew into my teenage years, it evolved to angsty teenagers with raging hormones fumbling through life. Finally, as I got older and mature (well, semi-mature) I started writing stories with real plot and depth! I write contemporary romance, writing sweet, feel-good romance that anyone can enjoy.

​In 2019, I entered Romance Writers of Australia Little Gems short story contest where I came joint first place with two other authors. This story was published in the Little Gems anthology. I was also fortunate to come second place in RWAus’ Emerald contest. This is the same story that’s now been published!

​When I’m not writing I work full time as a Software Tester. I’m married to a wonderful man who supports my writing and my unhealthy obsession with collectable teddy bears.

You can find Lisa at: