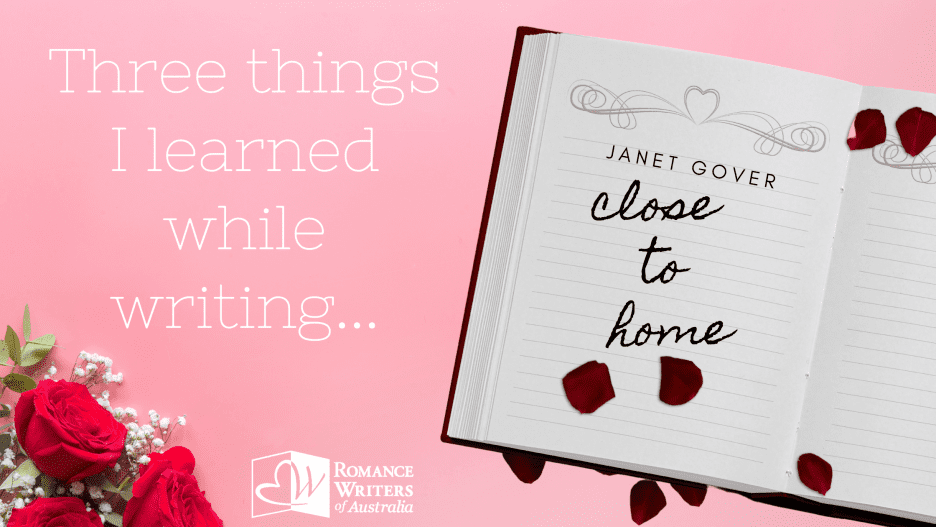 Welcome back to RWAs ‘Three Things I Learned’ blog. Author, workshop coordinator and writing teacher Janet Gover is no stranger to RWA readers, either through her many books or in her dedication to the craft of writing! Janet joins us today to share her three things she learned from writing her recent novel ‘Close to Home’! Welcome, Janet!

When I think about this, it makes perfect sense. What possible reason does low fat whipped cream have to exist? Whipped cream is an indulgence and counting calories has no place in indulgences.

Welcome cakes like the ones Aunt Alice cooks in Close To Home were very much a part of my small town childhood, and the fellowship and community spirit they represented were things I really wanted to capture in the book. I’m not good at baking. In fact, my previous attempt had resulted in a plate of burned biscuits that even I had to agreed were not fit to eat. Undaunted, I decided to have a try at Aunt Alice’s cake – purely for research, of course. Once I solved the whipped cream issue, I was very pleased with the result.

2. My favourite snack food is Pintxos

I discovered Pintox (pronounced pin-chos… I think) while on holidays in the Basque region of northern Spain. They are pieces of crusty bread, with an amazing selection of toppings – seafood, wafer thin slices of Iberian ham, olives, peppers, mushrooms… you get the idea. They are usually eaten while meeting friends in a bar, and go exceptionally well with a glass of red wine.

It was while in Spain eating Pinxos and drinking red wine that Lucienne, one of the two matriarchs in Close to Home, wandered into my head and started telling me her story. Spain may be a strange place to start developing a story about an Australian rural town, but when Lucienne started talking to me, I had to listen. My extremely patient husband is used to things like that happening, even when we are supposed to be going out for his special birthday dinner. (oops)

3. The modern circus was created in 1768 by an English cavalry officer

Not everything I learned writing this book was food related, honestly. I did a lot of research into circuses, their history and culture, how the circus works and how the performers live.

The modern circus is generally considered to have begun when Philip Astley, a former cavalry Sergeant-Major turned showman, opened an amphitheatre for the display of horse riding tricks at Lambeth in London. It featured a circular arena that would later evolve into the circus ring. Such was his success that he soon added jugglers and acrobats and even clowns to his troupe. This popular form of entertainment soon spread to Europe, America and in 1830, Australia saw its first circus performance.

The circus has a long and proud tradition. I wanted to be sure I properly represented this history in Close to Home. I went to a number of circuses, watched the shows and spoke to the performers.

And another thing I learned – even a grown up can sometimes dream of running away to join the circus.

About Close to Home

Two households, both alike in dignity…

Aunt Alice Dwyer loves her small Australian town. She’s rarely left its comforting embrace. She knows everyone in it; in fact, she’s related to most of them. All she wants is to keep her family safe and the town running exactly the way it always has. Her way. But when an exotic French artist comes to town, her hold begins to weaken…

Lucienne Chevalier, once the toast of Europe, has come to Nyringa after a tragic loss to hang up her sequins and create a place for her circus family to rest between tours. With her is Simon, her grandson, recovering from an injury so damaging he can no longer perform. Lucienne fears he’ll never embrace a new future. That is, until she notices the chemistry between him and the new schoolteacher… All they need is a push.

Both grande dames think they know what’s best, but with equal amounts of stubbornness on both sides, peace looks unlikely. Then a relationship between Alice’s rebellious great-niece and a teenage acrobat sets the two communities on a collision course. But when the bakery starts making patisseries over lamingtons, the battle lines are truly drawn…

A story of community and family. Of the love that brings them together … and the fears that would tear them apart.

I grew up surrounded by books. Both my parents loved to read and they shared that love with me. In the tiny Australian bush town where we lived, there wasn’t a lot to do except read and ride my ponies.

As it’s pretty hard to make a living out of riding ponies, I guess I was always going to be a writer.

After some fun-filled years at Queensland University (during which I passed the occasional exam), I became a television journalist, first in Australia, then in Asia and Europe. I got to see and do a lot of unusual things. I met some interesting people, including one Pope, at least three Prime Ministers, a few movie stars and a dolphin. I also discovered that most interesting people are often the ‘ordinary’ people – who sometimes have quite extraordinary stories to tell.