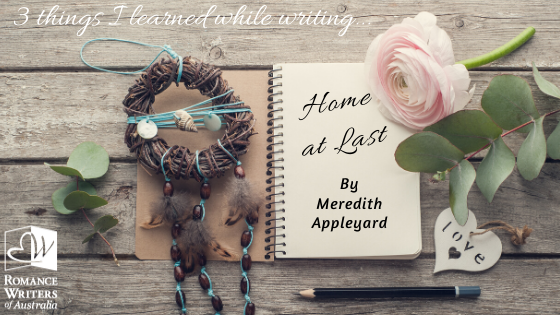 Welcome author Meredith Appleyard! Meredith writes stories set in country Australia. Her books include: The Country Practice (2015), The Doctor Calling (2016) and No Job for a Girl (2017). Meredith joins us today to tell us about three things she learned while writing her new release ‘Home at Last’.

1. Change is inevitable, but some things do stay the same

Home At Last is my fourth book and is set in the outback city of Broken Hill against the backdrop of the Royal Flying Doctor Service. Once upon a time I was an RFDS nurse … Back then we flew in un-pressurised Nomad’s, with what these days would be considered basic equipment.

Today’s RFDS aircraft are high-tech flying intensive care units and the RFDS personnel extremely skilled and experienced. Needless to say, I had some research to do to bring me up to speed.

But at the end of the day, as one flight nurse pointed out to me, it doesn’t matter how much high tech equipment you have at you fingertips, you only have one pair of hands. You still rely on your assessment skills to prioritise what’s required. And the primary needs of the patient haven’t really  changed.

Another thing that stays the same is how reassuring the RFDS is for people living, working and travelling in remote areas. And the relief experienced when they need medical help and they know the RFDS is on the way.

2. Just how willing people were to answer my questions

The main character in Home At Last is Anna Kelly, and she’s an RFDS pilot. My flying experiences haven’t been in the cockpit so when I set about researching the book I talked to four RFDS pilots, and corresponded with the wife of one of them. She’d been an air hostess in a previous life and had a good understanding of the aviation industry. I’d ask her questions, she’d relay them to her husband the RFDS pilot, and then feed the answers back to me in layman’s language. It worked incredibly well. Where there’s a will, there’s a way!

And of course I interviewed several RFDS nurses because Nick Harrison, the other main character in the book is an RFDS flight nurse.

The nurses were all extremely willing to share their knowledge and experiences, giving me great insight into what it’s like to be a modern-day RFDS nurse.

3. Broken Hill is a great place

One of the first things I did when I started writing Home At Last was revisit Broken Hill. I’d been based there for a short time back when I worked for the RFDS but I hadn’t visited for many years.

There, in the middle of nowhere, is an outback city with a rich and interesting history. It proved to be a wonderful setting, partly because of its uniqueness. I visited several times in the course of my research and really got a feel for the place again. Then I went back to launch Home At Last at the RFDS visitor’s centre. A fabulous day!

And if you asked, you’d be amazed by the number of people who have some connection to Broken Hill, either past or present. If you’ve never been there, it is a great place to visit.

About Home at Last

Flying solo for the first time had been the greatest high of Anna Kelly’s life. So when the chance of a dream job as a pilot with the Royal Flying Doctor Service comes up she takes it, even though she has to leave her home in Adelaide and move to remote Broken Hill – a place she had hoped she would never see again.

The bad memories the town provokes remind Anna why she keeps men at arm’s length but as her work proves fulfilling, her housemate becomes a friend and a warm community grows around her, Anna is surprised to discover that Broken Hill is starting to feel like home.

But there is no such thing as plain sailing and with errant mothers, vengeful ex-patients and determined exes on the prowl, life is becoming increasingly complicated. More than that, the distractingly attractive Flight Nurse Nick Harrison seems keen to get to know her better, and he has a way of finding a path through her defences. But will he still want her if the truth comes out?

Home at last can be found on Amazon

Meredith Appleyard lives in the Clare Valley wine-growing region of South Australia. As a registered nurse and midwife she practised in a wide range of country health settings, including the Royal Flying Doctor Service. She has been an agency nurse in London and a volunteer in Vietnam. When a friend challenged Meredith to do what she’d always wanted to do – write a novel – she saved up, took time off work, sat down at the computer and wrote her first novel. Realising after the first rejection letter she needed to learn more about the craft of writing, she attended workshops, joined a writers’ group and successfully completed an Advanced Diploma of Arts in Professional Writing with the Adelaide Centre for Arts.

Meredith lives with her husband and border collie Lily, and when she’s not writing she’s reading!

You can find Meredith at: