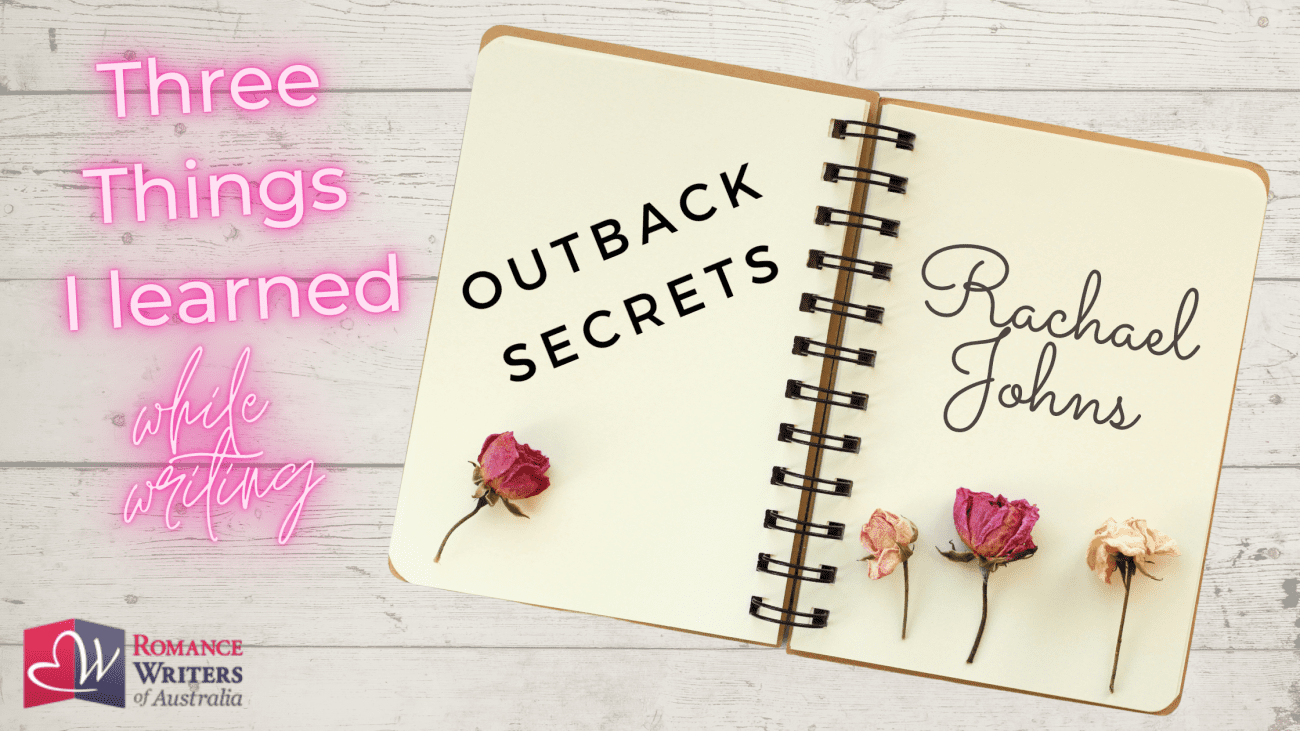 Welcome to the RWAs ‘Three Things I Learned’ blog. Everyone who loves romantic fiction knows the one and only Rachael Johns! Rachael is award-winning and best-selling, ABIA-winning author of romance and women’s fiction. Rachael writes about pretty normal people creating pretty amazing happy ever afters – who doesn’t love that! Rachael has joined us on the blog today to talk about three things she learned writing her novel ‘Outback Secrets’. Welcome Rachael!

I believe there’s an element of magic in writing and that often my subconscious is one or even two steps ahead of my conscious mind. In OUTBACK SECRETS, I knew I wanted to include a mysterious benefactor that helped local people and groups in need, but I also had no idea how the reveal was going to pan out. In the early writing stages, I was talking to my friend and fellow author, Anthea Hodgson, and she told me about a character who used to hang out in a wheatbelt pub, nicknamed Sexy Rexy. OUTBACK SECRETS is set in a pub, so I was trying to create a few quirky regulars at the time and decided to call one Sexy Rexy.

Just over halfway through the book, I started to wonder if he was really relevant and if I was making too big a deal of him (just cos I was having fun with him), then right as I was nearing the black moment and wondering how I was going to resolve the mysterious benefactor plot line, my friend and critique partner, Beck Nicholas said, ‘what if Sexy Rexy did this…’ and suddenly I had my resolution AND a reason that he’d been hanging out in the book all along. Granted, it was actually Beck not my subconscious that solved this issue, but I still believe in the magic. All my books have had something like this – in which I’ve put a character or item in early on with no real understanding of why they were there, and it has all come together in the end.

This is also a reminder to me that I should never take anything out in the first draft because only when I’m finished can I see what works and what doesn’t!

OUTBACK SECRETS is the 5th in my Bunyip Bay trilogy (yep, you read that right) and I always knew it would be about a character who had appeared in all the previous books – Liam, the publican. I also wanted to write a Christmas book, but aside from that, I didn’t really have much of an idea of a plot. I wrote 30,000 words with one heroine; the trope was going to be ‘The One that Got Away’ but something just didn’t feel right. Liam is American and the heroine was too, and I couldn’t ignore my niggling suspicious that two Americans weren’t quite right for an Aussie rural romance, so I decided to go back to the drawing board.

I fell in love with my new heroine – she was a librarian come back to town after her brother’s death and was trying to raise money for rural men’s mental health by putting on a pantomime, which would involve all the beloved characters from my other Bunyip Bay books. I felt hugely passionate about the issues in this book, something which I realised was lacking in my first version and Bridget and Liam were connecting on so many levels, but I just couldn’t get the pacing to work.

I started to feel physically ill as my deadline got closer and closer and then one day, I had a nap, and realised I had to start all over again. My writing friends thought I was crazy because I had all the elements of a good rural romance, but I just couldn’t make them work.

With less than two months to deadline, I started again – I went back to basics; I chose a much more rural heroine (Henri is an ag pilot), hung my plot on a classic romance trope (fake dating) and told myself if this didn’t work, I’d have to quit writing and get another job altogether. Thankfully, I did manage to get to the end of this third attempt, but when I submitted it to my publisher, she didn’t love it. She felt it lacked the emotional depth of my other rural romances and sadly, I had to agree.

However, with a few weeks away from my manuscript and the feedback from my publisher and editor, I managed to revise this problem child novel into something I’m proud of and all its early reviews have been glowing. The moral of this story is that some books are harder than others but if you stick at it and put in the hard yards almost anything is fixable.

3. I have anxiety and I need to be kinder to myself

Last year and the beginning of this one I really struggled with my creativity. I got to the point where I was so anxious about building on my success and writing something amazing that I worked myself into a state where I couldn’t write at all. Even when I had an idea, I just couldn’t seem to bring myself to write. I went from writing 2k a day to struggling to write 2k a week and I knew I had to do something, or I was going to have to stop writing. I realised that in this era of social media where we are constantly seeing what everyone else is up to, it’s so easy to look at all you’re NOT achieving (rather than what you have or are) and twist yourself up into knots about not being good enough. I’d started to dread my keyboard and I’d lost my purpose. I had begun to write for the money (because that’s what’s paying my bills) rather than for the fun and the love of stories, writing and reading.

I did a few things to conquer this, and I’m pleased to report I’m in a much better place now and loving my writing (most of the time) again. I went to my doctor and told her the state I was on – she started me on anxiety medication and referred me to a psychologist and both have helped me immensely. Combining this with regular exercise and a real decision to be kinder and put less pressure on myself have really helped me enjoy my writing again and focus on what’s most important. Now, if I don’t achieve my word goal for the day, I don’t beat myself up about it. I’m making more time for reading than ever, which reminds me what I love most about my job and motivates me as well.

Keeping secrets comes naturally to him … but will it ruin his chance at love?

Liam Castle knows the secrets of everyone in Bunyip Bay. As the owner of the pub, he’s heard it all – from marriage proposals and farming disasters to family rifts and everything in between. The locals love to confide in him, but no one knows he’s hiding a tragic past.

And he wants to keep it that way.

Agricultural pilot Henrietta Forward lives for her job, choosing work over romance. But when an incident in the air brings Henri home to Bunyip Bay earlier than planned, she finds herself questioning everything she believes about herself.

But Henri’s secret isn’t her only problem.

Her mother will stop at nothing to have her settled down back in the Bay, and while Henri had always known domesticity wasn’t the life for her, now she wonders what her future holds. So when Liam – always the first to lend a hand to those in need – agrees to play along with Henri’s scheme to ward off her mother, she has mixed feelings. What happens when a pretend romance starts to feel like the real thing?

Will Henri’s demons and Liam’s traumatic past prove too great a barrier to love?

Rachael Johns is an English teacher by trade, a mum 24/7, a Diet Coke addict, a cat lover and chronic arachnophobe. She rarely sleeps and never irons. She is also the bestselling, ABIA-winning author of The Patterson Girls and a number of other romance and women’s fiction books, including her recent bestseller, Something to Talk About. Rachael is currently Australia’s leading writer of contemporary relationship stories around women’s issues, a genre she has coined ‘life-lit’.

Rachael has finaled in a number of competitions, including the Australian Romance Readers Awards. Jilted (her first rural romance) won Favourite Australian Contemporary Romance in 2012, and The Patterson Girls won the 2016 Romance Writers of Australia RUBY Award and also the 2015 Australian Book Industry Award for General Fiction. She continually places in Booktopia’s Top 50 Aussie Authors poll.

Where to find Rachael online