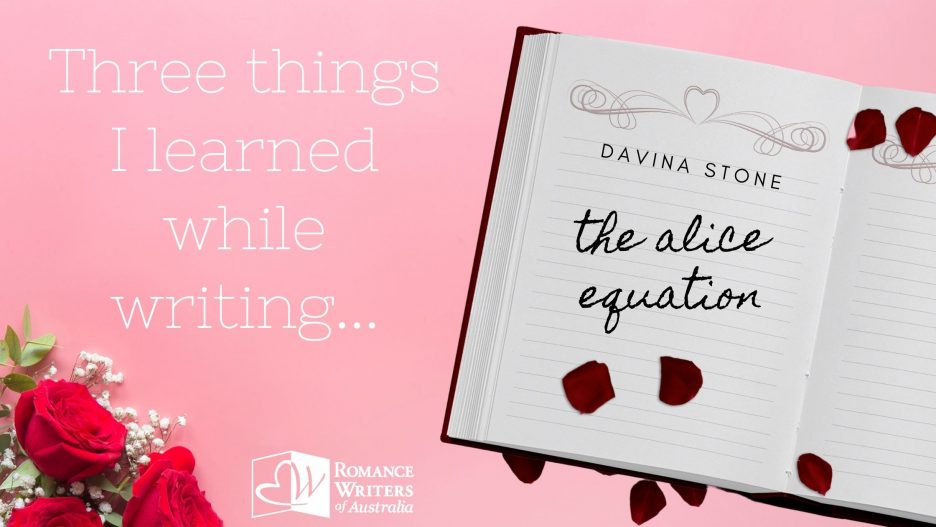 Welcome to the RWAs ‘Three Things I Learned’ blog. Davina Stone is an RWA winning author of contemporary romance fiction. Davina writes stories about flawed but lovable characters who get it horribly wrong before they finally get it right (they also kiss a fair bit on the way to happily ever after). Davina is here today tells us three things she learned from writing the first of her Laws of Love series ‘The Alice Equation’. Welcome Davina!

1. Sometimes you have to start all over again.

My first version of The Alice Equation got some sobering feedback from judges in a competition. I should have known. I’d rewritten the first chapter at least 46 times; unhappy with it, but unable to put my finger on what was wrong. When the feedback came back from two out of three judges that my hero Aaron was a deeply unlikable misogynist, I had to do a major rethink. I nearly gave up on Alice and Aaron’s love story, put it away and wrote another novel completely unrelated.

Then, six months later I was watching a movie (a rom/com of course), and something clicked. I realised what had to change. Only problem was, it meant rewriting the whole novel. But because it had been percolating somewhere in my subconscious, it did a relatively good job of rewriting itself. (Okay, that’s a slight exaggeration, but it only took two months).

In 2020 The Alice Equation made it into the finalists for the Valerie Parv Awards. The point is we need to be open to revising, or even starting again; not be so close to our work that we can’t see its faults or take constructive criticism. I am deeply grateful to the judges who gave such honest feedback. Without them, I may never have been able to see the problem, and I’d be on rewrite 204 of chapter 1. And unpublished!

2. Building a community of writing/reading friends is essential.

Without my writing friends in RWA and others I have met in writer’s FB groups and on Instagram/bookstragram, The Alice Equation— and the other two books in the series so far—would likely still be languishing on my computer. I have gained so much support from my fellow writers at all different levels of the writing/publishing trajectory and have learned to ask questions, no matter how trivial they may seem. My writing buddies all around the world have always come forward with answers, and their generosity and kindness has touched my heart.

3. Indie publishing is for me.

After I’d spent weeks trying to perfect a synopsis (I hate writing synopses!) and sending out a zillion query letters on my first polished— but as I now know, very wrong, version of The Alice Equation—I concluded that the traditional route was not for me. I’ve run a small business before and find many of the aspects of self-publishing exciting. I’m also something of a control freak. Add it all up and the Indie route was a no-brainer for me. It’s important to add that I did not choose indie as a second best; “Oh well, if a trad publisher doesn’t want it, I’ll Indie publish.” I took publishing The Alice Equation very seriously; learnt everything I could about self-publishing, went to a highly experienced editor of romance novels, got professional covers made and paid for services like Vellum for formatting, Bookbrush to make my own marketing images and Bookfunnel for my reader’s magnet and ARC distribution. I won’t lie, Indie publishing is a huge amount of work; you are a combined writer, editor, formatter, publisher, marketer, advertising executive, accountant—and oh yes, you still need a life outside writing to stay sane! Need I say more? This whole process has taught me that publishing is a very personal journey, and no one can tell you what is best for you.

But please, do, above all else, enjoy the journey!

About The Alice Equation

Alice Montgomery’s life is like Groundhog Day. Five years after graduating, she’s still working in her mum’s bookshop, hiding her stash of romance novels under the bed and pining for the gorgeous guy who helped her over a panic attack before her final uni exam.

Aaron Blake loves to party—hard. His idea of commitment to anything other than his legal career is strictly three months. Until landing a job with the most prestigious—but conservative—law firm in town means he has to convince the partners he’s deeply committed to family values.

Aaron needs a fake date fast—and who could be safer than his bookish friend Alice?

Now the heat is notching up. Aaron’s feelings for his fake date are proving anything but safe, and Alice is discovering her inner sex-goddess.

But when secrets are revealed and lies uncovered, both Alice and Aaron will have to work out the hardest equation of all… what this crazy thing called loved is all about.

The Alice Equation can be purchased from Amazon as well as here.

Davina grew up in England, before meeting her own hero who whisked her across wild oceans to Australia.  She has now lived half her life in both countries, which makes her a hybrid Anglo-Aussie.

When not writing she can be found chasing kangaroos off her veggie patch, dodging snakes, and even staring down the odd crocodile.  But despite her many adventures in her heart, she still believes that a nice cup of tea fixes most problems—and of course, that true love conquers all.

Davina’s short stories have been published in five Romance Writers of Australia anthologies. Her first novel, The Alice Equation was a finalist in the 2020 Valerie Parv Awards.  Her second novel, The Polly Principle (release April 2021), took second place in The Romance Writers of Australia 2020 Ripping Start Competition. Her third book in the Laws of Love series A Kiss for Carter was released this month.

Where to find out more about Davina and her books: