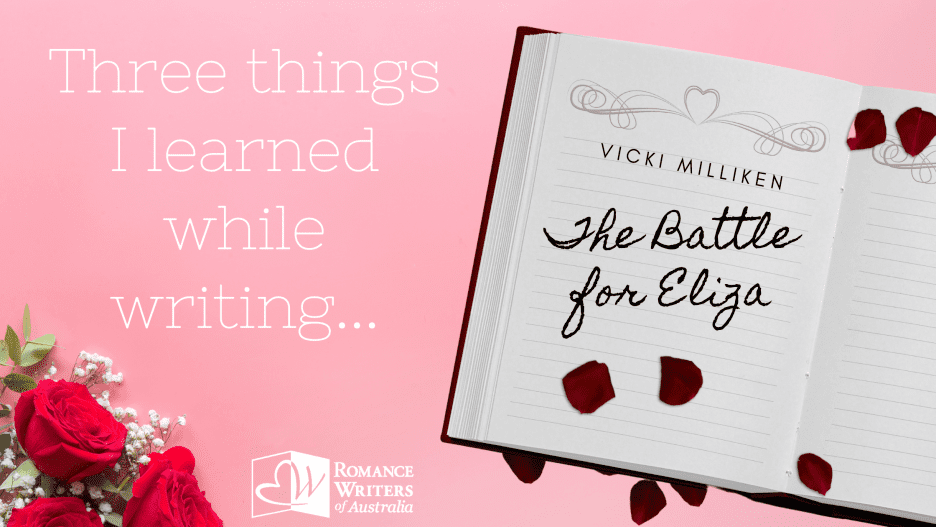 Welcome back to the RWAs ‘Three Things I Learned’ blog. Melbourne Author Vicki Milliken joins us today to share her eclectic mix of three things she learned from writing her recent novel, ‘The Battle for Eliza’! Welcome, Vicki!

1. I realised I hadn’t read a lot of historical romance!

Let me clarify. I’d read a lot of Regency romance – Anne Gracie, Eloisa James, Grace Burrows, Julia Quinn and Tessa Dare. But I hadn’t read many 20th century historic romances – and shock horror – that was the period that I’d decided to set my novel, The Battle for Eliza.

I started binge reading! In the process I learned that romances set between WW1 and WW2; in Australia; and laced with dry humour are not prolific. Clearly, I was not writing to market! One day, I’m hoping, not only will they be prolific, but popular!

2. Germs don’t respect people or relationships and are very sociable!

I finished writing my novel during the COVID lockdown in Victoria and contagion was never far from my mind. As the novel is set in Melbourne in 1925, I fell down the rabbit hole of researching people’s opinions in the aftermath of the Spanish Flu of 1918-1920.

I learned handshaking was written about as a source of infection and therefore a very dangerous practice. One article I read went to pains to point out that the hand that people coughed and sneezed into was often the same one they shook hands with. Sobering huh! Perhaps, the story suggested, Australians should adopt the Chinese custom – which I wasn’t able to verify – of shaking hands with oneself when meeting friends or colleagues.

Many articles pointed to the pocket, as a place of darkness and warmth, where organisms readily find a home. The old-fashioned practice by men of putting their handkerchiefs in their pockets was seized upon as highly unhygienic. The solution? Stuffing it up one’s coat sleeve or cuff as here there was no cul-de-sac! I love that image! Apparently, the draught of air caused by wind or the swinging of the arms was thought to keep the sleeve relatively germ free. For those persisting with their pockets – it was suggested that a frequent spray of eucalyptus dissolved in Eau de Cologne should do the trick of offering some protection!

Lastly it didn’t surprise me that kissing was hotly debated. Articles suggested that up to 40,000 germs were transferred with every kiss – one way!  Some suggestions to avoid this. Rubbing noses; anointing the lips with iodine; or kissing through a handkerchief – I’m guessing not one that had been in a man’s pocket – or a piece of antiseptic gauze. In fact, Popular Science Monthly wrote about an invention – a tiny racquet, think ping-pong size – with netting covered with antiseptic strong enough to kill all germs. Given it had to eradicate all 40,000, it probably killed other things too!

3. No one anoints you ‘Author’

By the time my novel had been published – self-published in my case – I’d learned a lot. But every article I read or podcast I listened to reminded me that the more I learned the less I knew. How then, could I call myself an author? Afterall, that was a term that applied to those, whose books lined my bookshelves.

Someone whose opinion I valued gave me the following advice, “Yes, you have more to learn. But so, has the recently graduated Engineer or Accountant. If you don’t believe in yourself, who else will?”Who else indeed? I’ve stopped looking for the graduation ceremony, the flowing gown and fancy hat. I’m learning to smile and boldly meet people’s eyes as I introduce myself as a writer – and when I’m feeling extra brave, an Author – and hoping that I never stop learning something new about

About The Battle for Eliza

A peacetime tug of war

Allies become enemies in affairs of the heart …

It’s 1925, and twenty-five-year-old Eliza Sinclair is determined not to be left ‘on the shelf’. Inexperienced in romance, she decides to master the art. But finding love is proving harder than she imagined.

That is, until ten thousand American sailors arrive on Melbourne’s shores. Caught up in the excitement, Eliza enters a dance competition and is thrilled to find herself partnered with Seaman Wil Sanders. Wil is fun and lays on the charm, and his kisses make it clear that the contest isn’t the only thing he wants to win. And if that’s making Alex Heaton question his commitment to his bachelor lifestyle and his role as her honorary big brother, then she isn’t complaining.

Eliza finds herself caught in a tug of war between the two men. Navigating the battle for her heart and finding her happy-ever-after, will require Eliza to draw on all her newfound confidence and savoir faire.

Praise for The Battle for Eliza” Passionately romantic. An engaging read that transports you to the 1920s.” Courtney Guthrie

After a lifetime in the corporate sphere, from oil to beer, Australian Author Vicki Milliken, opted out to follow a passion to write.

She loves historical romance, ballroom dancing, golden retrievers and chai lattes. When not writing she spends her time keeping fit, traveling and reading.

Vicki is looking forward to the day that her writing keeps her in champagne!