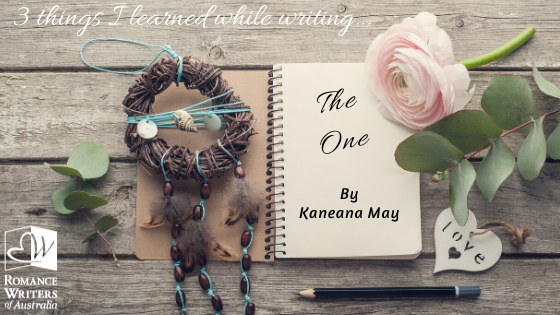 Welcome author Kaneana May! Kaneana writes both contemporary women’s fiction and teen/young adult fiction. Kaneana joins us today to tell us about three things she learned while writing her debut novel ‘The One’.

1. If you really want to write, you’ll make time for it…

When I started writing The One my youngest was only 4 months old, I also had an adventurous toddler and my son had just started kindergarten. Life was busy being a stay-at-home mum. School drop off and pick-ups were a nightmare, as they always seemed to coincide with the thirty-minute catnaps my baby enjoyed. My middle child, who really should have been having a day sleep, stubbornly refused and still needed to be run ragged due to her endless energy. I spent most of the day with the refluxy baby strapped to my chest as we went to the park, did cooking, hung washing etc… But I also tried to sneak in some writing time, because that was my ‘me-time’; it was my ‘out’ for the relentless activities of motherhood. Some days the baby would sleep, the toddler would watch Peppa Pig and I would write. Other days I’d cradle the baby and have a toddler snuggled against me as I’d get some words down. But, of course, there were days where I wouldn’t put pen to paper or finger to keyboard, which leads me to my next point…

2. Some days no words will be written … and that’s okay.

I still grapple with this, but life is busy and some days there is no time for writing. The excuses are endless of course; the kids won’t settle, or there’s an event on at the school or sometimes the words simply don’t come. But sometimes they aren’t just excuses, sometimes they are valid reasons for not being able to commit the time on certain days. This has often (and sometimes still does) cause stress. It’s easy to put a lot of pressure on ourselves as writers to write every day but sometimes that’s just not realistic.

3. ‘Write’ even when you’re not at the computer…

So often I’ve been on a roll writing when the baby wakes or the kids need picking up from school, or even when the kids interrupt you ten times in five minutes. This forced me to think about The One when I wasn’t at the computer. I would think about scenes in great detail when I was washing up and hanging clothes on the line and cutting up veggies for dinner. I also found that I’d often figure out plot problems or come up with new ideas when going for a walk or a run. I believe that ‘writing’ when I wasn’t at the computer really helped me develop the story of The One. I spent time thinking about my characters’ motivations, played with structure in my mind and also had chunks of dialogue figured out in my mind before I sat down.

On the wrong side of thirty, Bonnie Yates wants a happily ever after. Problem is, she keeps choosing the wrong guys. When an ex returns to town with a fiancée in tow, history and temptation collide. Unable to shake her inappropriate feelings Bonnie flees, becoming an unlikely contestant on popular dating show The One. Will she find what she’s looking for?

Working behind the scenes, Darcy Reed is a driven young producer, dealing with a tyrant of a boss. Despite being surrounded by love at work, her own love-life with long-term boyfriend Drew is floundering. Producing a flawless season is her best chance at a promotion. But with the unrelenting demands of the show, how will she save their relationship while making that shot?

Penelope Baker has relocated to a small seaside town to hide away with her secrets and nurse a broken heart. But with The One beaming across the nation’s televisions, she can’t seem to quite escape the life she left behind…

Before cameras roll on the final ceremony, all three women will discover just what they’re willing to do in pursuit of the one…

The One can be found on Amazon

Kaneana grew up on the Mid North Coast of NSW, Australia. After school she moved away, spent ten years exploring, and then moved back when she realised she had paradise at her fingertips. She now lives with her husband and three young children back home and a block from the beach!

Having graduated from university with honours in screenwriting, Kaneana went on to work in television, including roles as a script assistant on All Saints, a storyliner on Headland, and a script writer on Home & Away.

And if you are curious about her name, ‘Kaneana’ is a North American Indian name and often hard to pronounce. A little trick is to say ‘Ka-knee-na’.

You can find Kaneana at: