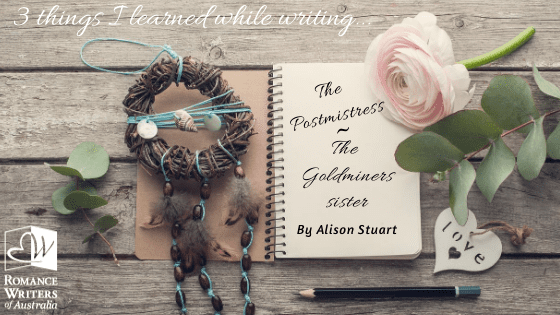 Welcome author Alison Stuart!  Alison is an award winning author of Historical Fiction, romance and mysteries. Alison has twelve published novels and is working on a series of historical romance series set in Australia. Alison joins us today to tell us about three things she learned while writing her Australian Historical series novels ‘The Postmistress’ and ‘The Goldminer’s Sister’.

Both these books form part of a short series set in the little goldmining town of Maiden’s Creek which is loosely (or maybe not that loosely!) based on the very real township of Walhalla in Gippsland, once one of Australia’s richest goldfields.

1. When I set out to write these stories I thought I knew the town and the area quite well, but I quickly discovered that writing about 19th century Australian history requires a great deal of research… Thank heavens for Trove which proved to be a fund of interesting tidbits about the period in general and Walhalla in particular. Some stories resound in our modern times.In the late 1860s a woman with smallpox returned to Walhalla with her husband and son. Such was the dire consequences of this disease, the local authorities, literally built an 8’ high fence around their house. When the woman died she could not even be carried through the town to the cemetery so she was buried ten feet down on top of a hill near her home. The house and the survivors belongings were burned to the ground… true story! I used this story in THE POSTMISTRESS.

2. In researching smallpox, I came across another little known fact… There were at least 12 major outbreaks of the Bubonic Plague in Australia between 1900 and 1925. It was brought in on ships and primarily affected Sydney. At the time it was believed to be a human to human infection but as a direct result of research in Australia, the source of the infection was identified as fleas on the ships’ rats. Whole streets in Sydney were demolished and bountys placed on dead rats. The stringent controls put in place meant only about 30 people actually died.

3. On a lighter note… I learned miners were a superstitious bunch. They believed that the ‘Knockers’ (imagine leprechauns) lived in the mines. When a mine collapse is imminent, there is a knocking sound and the miners believed this was the Knockers warning them that they were in danger… although some miners believed the Knockers caused the collapse! I prefer to believe they were friendly folk. To thank the Tommy Knockers, miners would save the last piece of their pasties and throw them into the dark corners of the mine to appease the fey folk. It is also bad luck to whistle in a mine, or for a woman (particularly a red headed woman) to enter the mine. I enjoyed weaving these threads of superstition into THE GOLDMINER’S SISTER… My poor red headed heroine, Eliza, gets into terrible trouble when she enters the Maiden’s Creek mine and there are consequences… but you’ll have to read the book to find out what they are!

THE GOLDMINER’S SISTER is out now and available in print wherever books are sold around Australia, also available in ebook and audio (I recommend the audio!!!). THE POSTMISTRESS is also still available in print and ebook. For more information visit my website www.alisonstuart.com

1871. Adelaide Greaves and her young son have found sanctuary in the Australian town of Maiden’s Creek, where she works as a postmistress. The rough Victorian goldmining settlement is a hard place for a woman – especially as the other women in town don’t know what to make of her – but through force of will and sheer necessity, Adelaide carves out a role.

But her past is coming to find her, and the embittered and scarred Confederate soldier Caleb Hunt, in town in search of gold and not without a dark past of his own, might be the only one who can help. Can Adelaide trust him? Can she trust anyone?

When death and danger threaten – some from her past, some born of the Australian bush – she must swallow her pride and turn to Caleb to join her in the fight, a fight she is determined to win…

About The Goldminer’s Sister

‘There are people in this town with the gleam of gold in their eyes and cold steel in their hearts.’

1873. Eliza Penrose arrives in the gold mining town of Maiden’s Creek in search of her brother, planning to make a new life for herself. Instead she finds a tragic mystery – and hints of betrayals by those closest to her.

Mining engineer Alec McLeod left Scotland to escape the memory of his dead wife and child. Despite the best efforts of the eligible ladies of Maiden’s Creek, Alec is determined never to give his heart again.

As lies and deceit threaten Eliza’s life, Alec steps in – although he has problems of his own, as he risks his livelihood and those he holds dear to oppose the dangerous work practices at the Maiden’s Creek Mine.

When disaster draws the pieces of the puzzle together, Eliza and Alec must save each other – but is it too late?

Alison Stuart began her writing career half way up a tree in the school playground where she wrote her first (unpublished) historical romance. She writes historical romance for Harlequin MIRA, Escape Publishing and also publishes independently. She has twelve published novels as well as a number of shorter works.  She also writes historical mysteries as A.M. Stuart and is published by Berkley Publishing (Penguin New York).

In her life outside writing, she enjoyed a varied career as a lawyer in a wide number of fields including the military and as a senior executive in the fire services

You can find Alison online at: