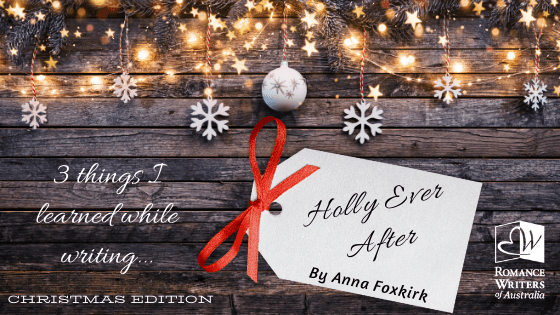 Are we ready for a Christmas HEA? Yes I hear you say! Get your Holly ready because there’s some kissing to be had! Please welcome our second 3 things – Christmas edition blog, with Anna Foxkirk!

1. Being in lockdown is not all bad

Okay, I tend to be a pretty positive person. And perhaps I’m a bit of a bouncer (though not in a mega-muscled hanging outside a nightclub sort of way). What I mean is, for me, one of the many living in metropolitan Melbourne, after the initial shock of the pandemic and then finding our world had shrunk to a 5 kilometre radius, I picked myself up and dusted myself off pretty fast (after all, I had baking to do and a jumper to knit and Scrabble to play with my family!).

But the pandemic punch in the gut also made me think, perhaps I should focus on writing and reading what makes me truly happy, after all, there was only so much misery I could handle. After, not a lot of navel-gazing to be honest, I knew what I had to do: write what suited me! No more straight-jackets, no more straight-laces. I rebranded myself as Anna Foxkirk – author of love, laughter and (mostly) happy ever after! I’ve since written two novellas (Double Trouble and Holly Ever After) and drafted three novels (Alice in Australia, Phoebe in France and Scarlett in Scotland) for my Passport to Love series which I’ll be self-publishing in 2021, and I’ve grown a whole new outlook as a writer of upbeat romantic women’s fiction. Boy, it’s been refreshing, not to mention liberating. Talk about burning brassieres. I’m now focused on writing books which make readers feel good, laugh out loud and fall in love with my fish-out-of-water characters.  I loved writing Holly Ever After – she’s such a muppet! – so fingers-crossed readers will too.

2. Folks your inspiration is not quarantined

After having a blast writing Double Trouble for a collaborative anthology, Love and Fireworks, alongside some fabulous author friends, I decided I wanted to write another novella that would complement the Passport to Love series I’d begun and also hopefully raise readers’ festive spirits. Unfortunately, lockdown meant not being able to stray even 5kms from my doorstep. I thought it was going to be difficult relying on my imagination and the internet to come up with ideas, however, once I got started there was no stopping me. It’s been such a lark taking a trip down memory lane, having a good old dig around in my memory banks and revisiting some of these places online. Holly Ever After is inspired by my own boarding school days in frost-bitten North Yorkshire, England (not bitter much!) and by some of the schools in which I’ve also taught in England and Australia. Although a bit of pashing in a stationery cupboard ensues, I swear that was purely rendered from my imagination, not memory!

Each of my Passport to Love books is set in a different location around the world. I’m fortunate to have had a bit of a globe-trotting childhood … and adulthood, (Quickly counting on my fingers here – I was born in Fiji, hold three nationalities, have lived in ten countries, and have definitely visited more than thirty). But even without this background, once you start delving around on the internet, it’s incredible how much you can find; as far as inspiration is concerned, we can conjure up amazingly rich inspiration travelling in our heads or with our fingertips on the keyboard.

I mean this in the broadest sense. I think many writers felt the rabbit in the headlights fear during the early days of the pandemic; doom scrolling became compulsive and panic suffocated the will to do anything creative.  But fear comes in many guises and it doesn’t strike only during pandemics. Fear cripples creativity when you compare yourself to others and think you’ll never be that good or achieve half of what they’ve achieved. Fear cripples creativity when you listen to the demons in your head telling you that you’re writing utter shite (again!) and should give up now. Fear cripples creativity when you don’t even try because of fear of failure, or you worry about what people will think of your work, or you think your work is somehow inferior, or you just don’t believe in yourself. As fellow author Davina Stone put it to me recently, sometimes you have to face the fear and do it anyway. Absolutely! When it came to writing Holly Ever After I believe my writing flowed because I was in my happy zone. Why? BECAUSE I had let go of an awful lot of fear and kicked the shit out of some mental barriers. So what if I’m never traditionally published? Who cares if only my mum ever reads my books? Who gives a stuff if I get  terrible reviews? Who gives a toss if I fall flat on my face and make a total and utter tit of myself? Only me! And I can always get back up and dust myself down.

If you are passionate about being a writer and what you’re writing, and if you dedicate yourself to your goals and keep going for long enough, you are bound to see results. Without doubt. Of course, the result may not be the crock of gold at the end of a rainbow, but it could be the rainbow itself. So, enjoy it! When you feel like that fish-out-of-water, own it! Be a rainbow fish! Be a dolphin! And while you’re at it, don’t give a flying fish what anyone else thinks!

So, after all this word-belching, what can I say I’ve learnt and would like to pass on after writing Holly Ever After?

If you feel walled in, try kicking down a few bricks. If you feel constrained, writing what you love can be liberating. When you’re bricking it, bloody do it anyway.

Focus on what you love and what makes you happy; focus on where you are going instead of the sharks in your peripheral vision; focus on being true to yourself and don’t be hidebound by anyone or anything – yes, you too deserve your Holly Ever After!

About Holly Ever After

Tis the season to be jolly!

But all Holly or Clyde want is some peace on Earth …

Burtonbridge School in the north of England might look like a magical place to teach, but with Christmas fast approaching and work piling up, young Kiwi teacher Holly Hadaway is feeling out of place and out of her depth.

Clyde Hunter has dropped out of university to pursue his writing dreams. Being a member of the school grounds and building maintenance team should be the sort of work that allows him headspace to think and be creative. But the festive season is proving testing, especially one prickly teacher who’s about to puncture his solitary bubble when he’s tasked to fix the lock on her stationery storeroom door.

Maybe storeroom is too grandiose a word. It’s more of a walk-in closet. And when Holly and Clyde find themselves locked in together, things starts to feel uncomfortably tight.

Of course, it’s the last thing either of them would ever wish for, and who knows if they’ll get their Holly ever after …

Anna Foxkirk writes stories with love, laughter and (mostly) happy ever after. Writing as Lou Greene, her creative fiction has been longlisted for the Richell Prize and awarded her an Australian Society of Authors mentorship. She’s also won the Historical Novel Society of Australasia’s First Pages competition and had a story shortlisted and published with Backstory magazine.

Anna’s writing is inspired by a life spent trotting the globe. She’s lived in some extraordinary places: Kiribati (a coral atoll in the Pacific Ocean), Edinburgh Castle, war-torn Bosnia, and a dilapidated farmhouse in France to name but a few. The itch to roam remains strong, but with her love of fine wine and great beaches, she’s now found the perfect spot to settle – on the beautiful Mornington Peninsula. Anna’s love of adventure and romance blisters a trail through her Passport to Love series to be published in 2021. If you fancy some festive cheer you might like to know she’s offering her Holly Ever After novella free to anyone who signs up to her newsletter before Christmas.

You can connect with Anna on:

Or grab your free Holly Ever After and be the first to hear Anna’s news here:  https://www.annafoxkirk.com/news

Also, when Anna’s not writing, she works as an editor and English literacy tutor and can be contacted here: https://www.fixingenglish.com