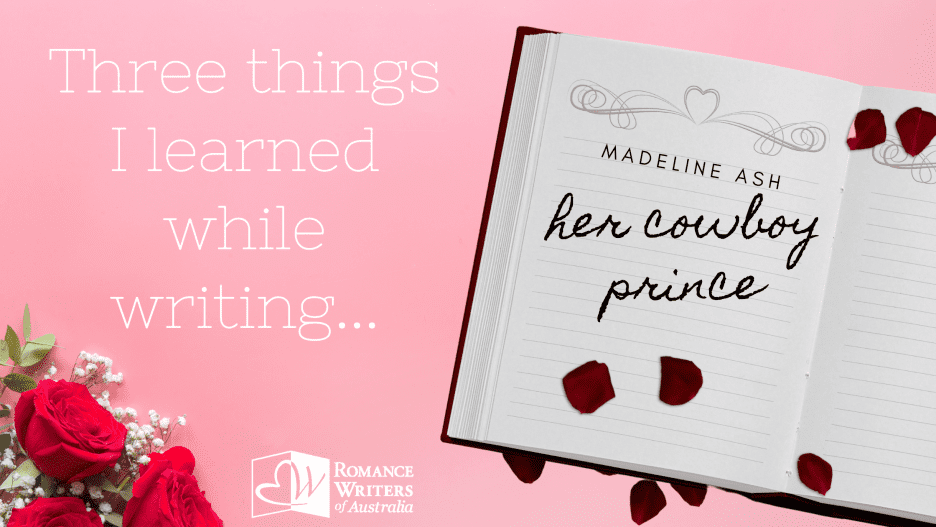 Welcome to our last ‘Three Things I Learned’ blog for 2020. And we intend to go out with a bang—of the cowboy variety! Two time RITA finalist and Ruby award winner for ‘Breaking Good’, Madeline Ash loves a hero with a kind heart. Madeline has come to share her three things she learned from writing her recent book ‘Her Cowboy Prince’! Welcome Madeline!

1. One vulnerable conversation is worth a dozen first kisses

I’m talking tension. Let’s say you’ve reached what feels like the cusp of a romantic turning point. The scene is begging to deepen. The characters might be physically very close. Their emotions are running wild and you might be tempted to give in to their first kiss. (And that absolutely might be the right choice for your characters in your story). But consider not doing that. Consider instead edging the conversation into vulnerable territory. One (or both) of your characters say something they never imagined sharing. This might be a truth, flaw, desire, mistake, regret, fantasy, shame, or conflict. This reveal will irrevocably change how the other character views them and approaches them from this point on. It will wrench the tension between them tighter; it will make readers forget to breathe. AND you still haven’t used up your first kiss!

Here’s a quick example from Her Cowboy Prince:

“No?” His breath lurched furiously. “Then what am I to you, Frankie? An obligation? An inconvenience? A private joke? A sucker who never—”

“My prince!” Her words cut through the air like a solvent, stripping away her anger and leaving the grain of raw emotion in her throat.

Kris looked like she’d just landed an uppercut to his chin.

Suddenly shaky, she wrapped her arms around her middle. “You’re my prince,” she said again, much quieter. “You don’t seem to realize that yet—that I don’t exist outside of this hierarchy just because we used to be friends. You’re my prince, and everything I’ve done has been to protect you.” She paused. “Your Highness.”

He took a swift, stiff step back.

Frankie is a guarded, kickass heroine. She rarely loses her cool, so to have her reveal something intimate in a burst of emotion acts as a real scene-charger. She could have cut him off with a kiss to show exactly what Kris means to her. Instead, this reveal instantly changes the way Kris will have to approach their romance, adding an extra layer of conflict when it comes to reaching that withheld first kiss…

2. Sub-characters need their own purpose

I’d previously only written category length stories without the breadth to include sub-characters of much substance. As my first single title series, it’s been a joy to sink into a longer word count and flesh out secondary characters. Since every character on the page has to serve the story, and not just exist to serve the main characters, I’ve learned to map out their goals, motivations and conflicts, and also how those elements could work with or against my point of view characters. This way, they are only on-page in scenes that serve both them and the story itself!

Okay—I regret this greatly—but I used to think italicising words was lazy writing that hit readers over the head with emphasis. I mistakenly believed the stress that italics provide could be more cleverly indicated through build up, characterisation, and sentence structure.

No longer! I’ve learned that italicising just the right word or sentence can give it ten times the impact.

“Stop,” she said, eyes pricking. “Just stop. Think. When you’re king, what will be expected of you?”

Concern lined his features as he scanned her face.

“And what expectation would that put on me?” she pressed.

“I don’t expect anything from you.” He frowned. “You can still work for the royal guard.”

“No. Kris. Please. You need to produce heirs.”

Born with dignity and unquestionable descent.

The blood left his face. “I need—”

“And I’m never going to be the right person to help with that,” she said, words cracking.

Without the italics, I’d have to overexplain Frankie’s emphasis outside of the dialogue, which would reduce the impact and pacing of the short, sharp sentences. I love it!

About Her Cowboy Prince

Meet the cowboy royal who will never be tamed—and the best friend sworn to protect him.

Kris Jaroka didn’t sign up for this. He and his triplet brothers were uprooted from their ranch to inherit the throne of Kiraly. His duties keep escalating, and no amount of shirking his guards can stop the gut-ache of leaving his best friend, Frankie, behind.

But his biggest challenge lies ahead.

For years, Frankie Cowan has secretly monitored the safety of Kris and his brothers. When Kris’s recklessness forces her to reveal herself as the head of palace security, her duty to protect him and his refusal to be tamed meet head on.

Bound together, their lies and hurt soon surrender to their chemistry, and Kris burns to offer her his future. But Frankie’s past isn’t fit for a cowboy, let alone a prince—proving that the person she most needs to protect him from is herself.

I’ve always lived in Melbourne. I’m emotionally allergic to spontaneity, and yet don’t mind the city’s unpredictable weather that drags me into rain when I’ve planned for sunshine. I like to call this my wild side.

I am a two-time RITA award finalist author and winner of Australia’s premier RUBY award. I adore writing contemporary romance that delves deep into the hearts and minds of my characters. I’m pretty strict on my leads, forcing them to be the best versions of themselves in difficult circumstances. They’re flawed, but also compassionate and brave. I always reward them with a happy ending.