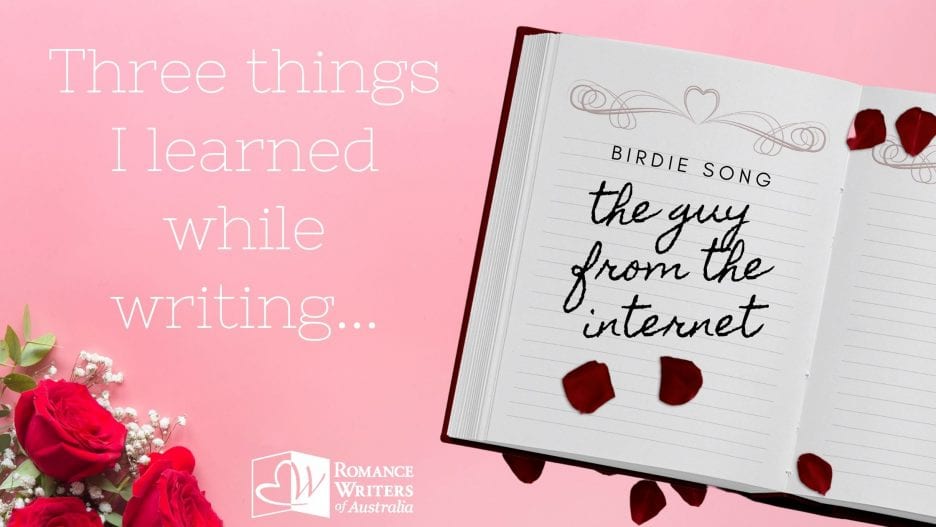 Welcome back to the RWAs ‘Three Things I Learned’ blog. Author Birdie Song is a romantic who writes sweet stories about people falling in love. Birdie is here today to tells us her three things she learned from writing ‘The Guy from the Internet’. Welcome Birdie!

1. There are stories inside us that need to be told

I never set out to write this kind of story. The Guy From The Internet was meant to be a short, simple online romance between a Chinese-Aussie twenty-something and an American in Paris. But over the course of drafting, I found myself digging deeper into the challenges that drove Holly to start the story where she did. They were challenges that mirrored my own.

Until this book was finished, I never self-identified as an “immigrant”, and yet that’s exactly what I am. I moved to Perth as an English-fluent pre-teen and just assumed the obstacles I ran into were the usual “growing up in the late 20th century” fare. It’s only now in retrospect that I see the pressures I faced may have been distinctly “first-generation” experiences.

Without meaning to, I had ended up with a book that explores some of these experiences — it just fell out of me. Holly’s story isn’t my story, but it draws from frustrations around reconciling the life I came from with the life I chose.

2. Writing about culture is hard, even when it’s your own

It’s very easy to offend people. Not that that’s necessarily bad — maybe things society normalised in the past should have been called out as offensive much sooner. But the downside of this is how difficult it can be to talk about culture at the moment. Will The Guy From The Internet be seen as too unrelatable, too foreign, too political, too token, too reinforcing of negative stereotypes? Or, given reader expectations… not enough?

It took me a long time to accept that I didn’t have to. There’s often a big perception gap between the problems we’re expected to have and the problems we actually do have. And the only way to fix this is through more diverse representation.

I don’t use the #OwnVoices hashtag lightly. It’s my way of saying Holly’s challenges are hers, inspired by my own. And while they may be someone else’s challenges too, they don’t necessarily have to be.

3. The “rules” of writing are an expression of the status quo

There’s a prevalent “rule” in writing where you must italicise uncommon words borrowed from non-English languages. This strikes me as odd, because who gets to decide what “uncommon” and “borrowed” mean? If you’re multilingual, non-English words are part of your daily vocabulary. And who’s to say your book won’t reach multilingual readers?

Putting my near-final manuscript through the beta process really drove this home. When a reader suggested italicising non-English words, I felt a very real pang of sadness. It was as if a fundamental part of me was being “othered” in my own work. Why can’t the languages we grow up with be accepted as a normal part of our narrative? After all, what we call modern English is itself a mash-up of Germanic and Latin languages.

The more I think about how language and writing developed over time as tools of expression, the more I realise that what we call “rules” are really just “practices” that emerge and recede as society evolves. So, where it makes sense, I keep my “borrowed words” un-italicised unless spoken with emphasis. I want my work to contribute to a more colourful status quo.

About The Guy from the Internet

A sweet romance with a touch of family drama.

Holly Chee does not have her life together. She’s flip-flopped on uni courses and career choices, and somehow scared off her long-term fiancée-to-be, much to the chagrin of her immigrant parents.

But she does have her streaming channel, where she broadcasts her art from her one-bedroom Mount Lawley apartment. And she has that guy from France… assuming he’s even who he says he is.

“The Guy From The Internet” is a sweet #OwnVoices Asian-Australian romance novella, set in the world of Somerville Downs.

Birdie Song is an Asian-Australian romantic who writes sweet stories about people falling in love. She believes love is more important than labels, integrity is our most attractive quality, and that no one should be judged for putting pineapple on a pizza.

Where to find Birdie online: